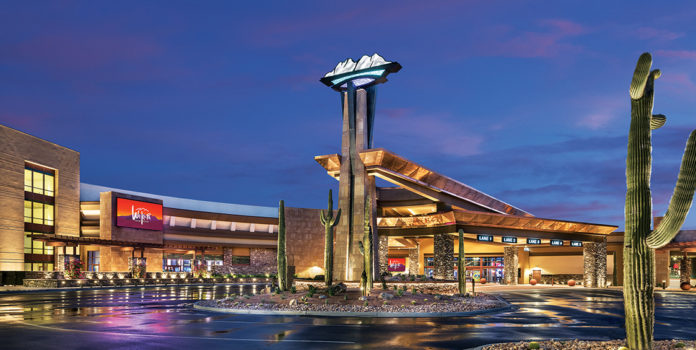 FORT MCDOWELL, AZ –  The We-Ko-Pa Casino Resort has celebrated its one-year anniversary. Originally opened in 1984 as the first casino in Arizona, Ba’Ja Bingo was renamed twice over the ensuing 37 years – as the Fort McDowell Gaming Center, and later, Fort McDowell Casino. The Fort McDowell Yavapai Nation’s historic 1992 standoff against federal agents who attempted to seize their slot machines paved the way for Indian gaming and enabled the tribe to build a strong community for their members.

Three years ago, the Fort McDowell Yavapai Nation committed to building an entirely new smoke-free facility to better reflect its brand and provide an elegant, contemporary ambiance for gaming enthusiasts and restaurant guests.

Rising to the challenge of unveiling a state-of-the-art 166,341 sq. ft. facility during a global pandemic, the Fort McDowell Yavapai Nation and their dedicated employees worked tirelessly to open the new casino while ensuring the health and well-being of all who worked and played there by adhering to all CDC recommendations and implementing personal protection measures throughout the property.

The result was a new facility that raised the bar for casinos in the area, boasting an impressive array of slot machines, bingo, tables and gaming amenities; fine and casual dining outlets; live entertainment; and Native American design elements reflected throughout the property.

Key milestones achieved over the past 12 months are:

“For more than 37 years, our tribal nation has taken great pride in offering excellence in gaming, and we’re thrilled to continue this legacy in our beautiful new facility,” said Bernadine Burnette, President of the Fort McDowell Yavapai Nation. “Our future plans include launching a new sportsbook facility with Betfred Sports, as well as opening Amore – the newest addition to our Dining Studio that will feature traditional Italian fare. We’d like to invite everyone to celebrate our one-year anniversary and experience the magic of We-Ko-Pa for themselves.”