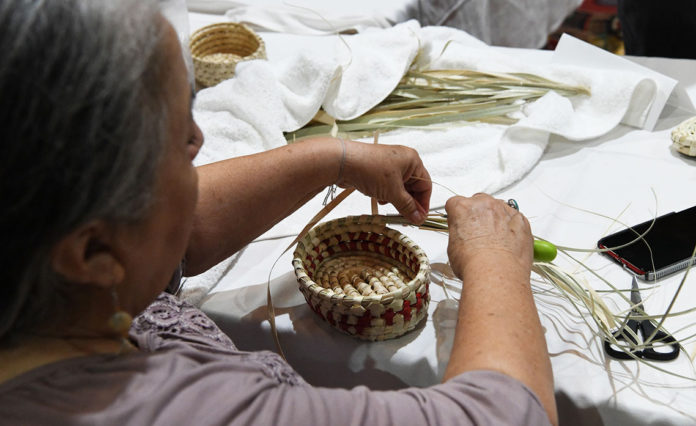 MARKSVILLE, LA – The Tunica-Biloxi Tribe of Louisiana hosted its 6th Annual Intertribal Basketry Summit recently at Paragon Casino Resort after taking a hiatus during the COVID-19 pandemic. The Tunica-Biloxi Language & Culture Revitalization Program invited basket weavers from regional Native American communities to demonstrate weaving techniques that are unique to their culture and heritage. The summit provided a space for Native Americans to showcase their weaving and basketry techniques and highlight the elements of their culture through the distinct materials, patterns and colors used in their crafts.

The art of basket weaving has endured for centuries and is easily distinguishable between tribes. Both Tunica and Biloxi weavers used local plants, such as dyed river cane, to weave baskets and occasionally sell them in markets as a form of income. Although tribal members no longer rely on basketry for a living, the cultural value of weaving is still very much alive.

“Weaving is an important part of our culture, and has been for centuries,” said John Barbry, Director of the Tunica-Biloxi Language and Culture Revitalization Program. “We are proud to teach this tradition to the next generation of weavers to ensure the endurance of our ancestors’ legacy.”

Visitors from across the state learned about the cultural differences and similarities between Louisiana tribes’ weaving techniques. Those who wanted to learn pine needle weaving and display their crafted baskets could do so alongside tribal members.