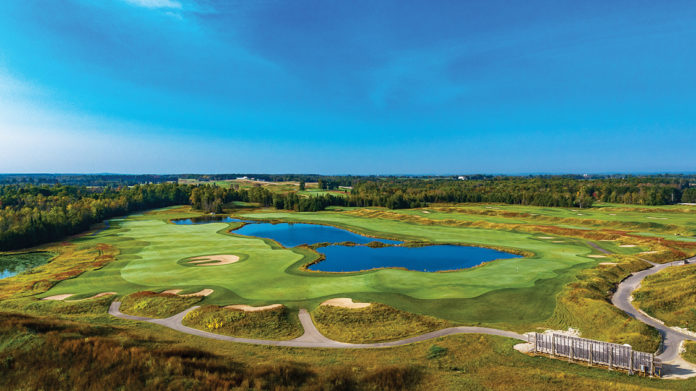 “Winning the Michigan Golf Course of the Year was an incredible honor for our golf course,” said Tony Mancilla, GM of Island Resort & Casino. “In a state with more than 700 courses and known for very high-end golf, it was a tremendous honor. Being named the National Course of the Year was the icing on the cake.”

Courses were graded on four categories: quality of the course; environmental impact; charity work and growing the game. Sweetgrass Golf Club scored high in all metrics, starting with quality of the course. Their unique watering system uses reclaimed water from the local wastewater treatment plant to help reduce the need for groundwater. In addition, the course donates over $150,000 per year in rounds and funds to local charities and non-profit organizations. Sweetgrass Golf Club also helps grow the game by supporting high school championships and women’s professional golf.

Sweetgrass Golf Club has showcased outstanding growth, like the Epson Tour. When the partnership started, the course operated with 12,500 rounds of golf and the Epson Tour featured 15 events with an average purse size of $110,000. In 2022, rounds at Sweetgrass will exceed 32,000 by the resort and 21 events highlight the “Road to the LPGA” and average purses of $210,000. Through the Island Resort Championship, Sweetgrass donates $50,000 to $60,000 per year to charity and non-profit organizations.

“Growing the game of golf on the women’s side was a huge factor in earning these awards and it’s essential to growing the game, in general,” said Mancilla. “We are very excited to support the women’s game by hosting the official qualifying tour of the LPGA each and every year through the Island Resort Championship. A large part of that excitement is increasing the tournament purse to $212,500 in 2022. It’s our hope that major media outlets – television, magazines, online publications – join us in promoting the outstanding product the Epson Tour provides.”

The Epson Tour (formerly the Symetra Tour) is the official qualifying tour of the LPGA Tour and enters its 42nd competitive season in 2022. With the support of entitlement partner Seiko Epson Corporation, the tour’s mission is to prepare the world’s best female professional golfers for a successful career on the LPGA Tour. In the last decade, the Epson Tour has grown from 15 tournaments and $1.6 million in prize money to $4.41 million awarded across 20+ events in 2022. With more than 600 graduates and alumnae moving on to the LPGA Tour, former Epson Tour players have won 459 LPGA titles.