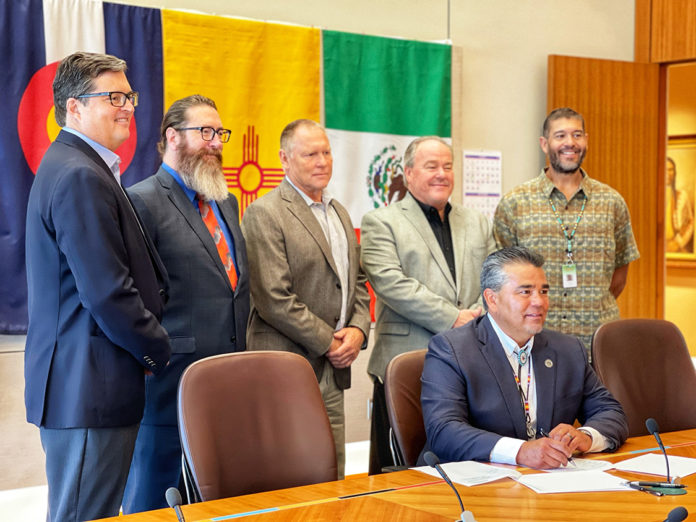 The tribe’s decision to join WSTN bolsters the governance of the unique international initiative led by sovereign tribal nations, states and county governments. As the latest government to sign WSTN’s organizing Memorandum of Understanding, the Southern Ute Indian Tribe is entitled to appoint a representative to the Board of Directors.

The Southern Ute Indian Tribe is the third tribally affiliated member of WSTN, joining the Ute Indian Tribe and BlackHawk Energy, a wholly owned Section 17 Federal Corporation of the sovereign Jicarilla Apache Nation established under a federal charter. The other government members are the states of New Mexico, Utah, Wyoming and Baja California, Mexico, as well as the western Colorado counties of Garfield, Mesa, Moffat and Rio Blanco.

“The Southern Ute Indian Tribe has a strong and successful legacy in energy and economic development,” said Melvin J. Baker, Southern Ute Tribal Chairman. “The tribe understands the benefit of strong business and intergovernmental relationships to strengthen its self-determination and sovereignty. The tribe is excited for the opportunity to join Western States and Tribal Nations and have a seat on the board encompassing multiple tribes, states and counties focused on supporting rural economies while collaborating to provide energy transition solutions for the future.”

“The Ute Indian Tribe welcomes the Southern Ute Tribe to Western States and Tribal Nations,” said Shaun Chapoose, Chairman of the Ute Tribal Business Committee. “As co-founders of this unique organization, our mission has always been to attract more Native American voices to our effort to advance tribal self-determination through responsible development of our energy resources.”

Chairman Chapoose added, “As the original guardians of the environment, sovereign tribal nations are uniquely equipped to chart a course toward energy development that supports our continual environmental improvement. With the participation of the Southern Ute Tribe and the Jicarilla Apache Nation through their wholly owned Section 17 Federal Corporation, BlackHawk Energy, our collective voice is stronger and makes good on the vision we foresaw when we insisted that the name of the organization reflect more than a single tribal nation.”

“The addition of the Southern Ute Indian Tribe to WSTN is another landmark for our organization and its ability to provide a coherent, unifying direction for the energy and environmental future of the West,” said Andrew Beowning, WSTN President. “The Southern Ute Indian Tribe brings not only another sovereign tribal perspective, but a sophisticated approach toward doing business in a way that builds wealth for its people in harmony with the environment.”

“We welcome the Southern Ute Tribe and look forward to working together to advance the interests of Western States and Tribal Nations for the benefit of our communities,” said Glen Murrell, Executive Director of the Wyoming Energy Authority.