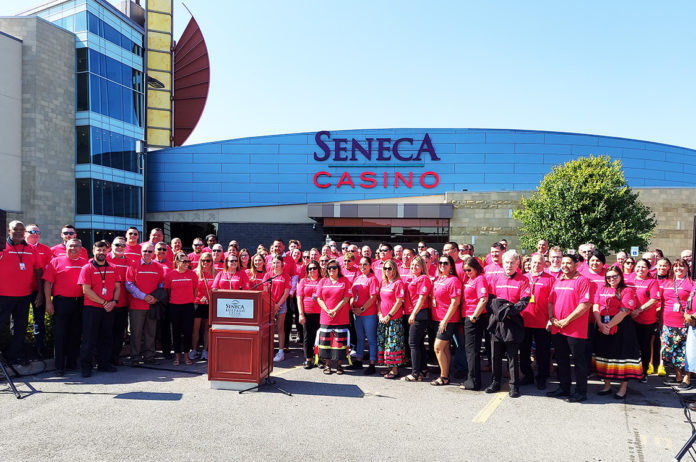 BUFFALO, NY – The Seneca Nation is launching a widespread public awareness campaign aimed at growing the public’s understanding and recognition of Seneca history and the significant economic contributions the Nation and its businesses make in Western New York.

Seneca Nation officials, employees and supporters, wearing T-shirts and carrying banners emblazoned with the campaign’s theme #StandWithSeneca, gathered in front of Seneca Buffalo Creek Casino to announce the campaign and underscore many of its key points.

The #StandWithSeneca campaign will be a wide-reaching effort, featuring paid advertising, including television, radio and billboards in select markets, social media messaging and engagement, community outreach and other tools and materials. A new website, StandWithSeneca.com, is now live, and the campaign’s first television commercials will begin airing in the Buffalo area in the coming weeks. The initial spots will highlight the prominent economic role the Seneca Nation plays in the region.

Today, more than 5,000 people are employed by the Seneca Nation’s government operations and many business enterprises, including its casino operations, Seneca One Stop stores and other Nation-owned entities, earning approximately $222 million in annual wages. In addition, the Nation and its businesses spend more than $360 million each year with thousands of New York vendors.

“The economic statistics are impressive, but they only tell part of the story,” said Kevin Nephew, President & CEO of Seneca Gaming Corporation, one of the region’s largest private employers. “Their true impact is felt in the living rooms of the thousands of Western New Yorkers who work in our facilities. For our co-workers, the statistics represent the groceries they buy for their family, the mortgage payment on their home, their children’s tuition, and every other part of life that their paychecks help make possible.”

Along with the economic impacts, the #StandWithSeneca campaign will focus on the Seneca Nation’s history as one of the nations of the Haudenosaunee, or Iroquois Confederacy, and its centuries-long efforts to defend its sovereignty and its home lands against repeated attacks from other governments, including several attempts to remove the Seneca people from Western New York.

The Nation is launching the campaign as it prepares to begin negotiations with New York State on a new gaming Compact. Under the current Compact, which expires in December 2023, the Nation has sent nearly $2 billion in payments to Albany, with hundreds of millions of dollars going to support local governments.

“Tomorrow is 716 Day, a day when Western New Yorkers have come to celebrate the many unique aspects and the spirit of our region,” said President Pagels. “The Seneca Nation is Western New York. We want our friends and neighbors to stand with us in our fight for fairness, so that we can continue to deliver for our region and sustain our people for generations. Western New York is our home – always, still and forever.”