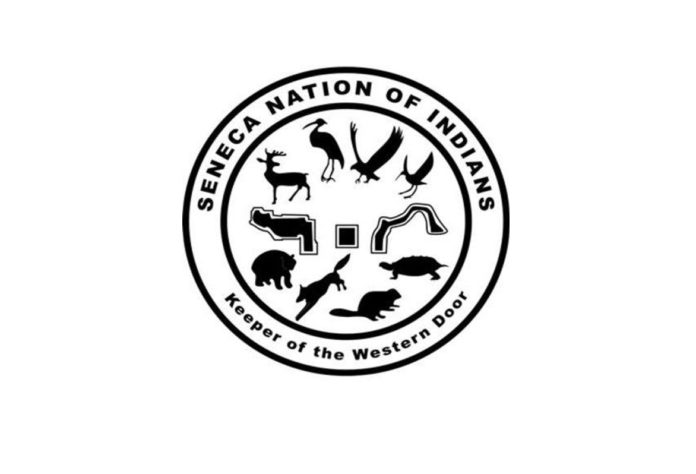 IRVING, NY – In a special meeting yesterday afternoon, the Seneca Nation Council approved a resolution directing the transfer of funds to resolve the Nation’s outstanding gaming compact dispute with New York State as soon as practicable. The Council resolution calls for transferring $564,842,625 from a restricted escrow account in which compact-related funds have been held throughout the five-year dispute. The amount covers the period of January 1, 2017 – December 31, 2021.

In addition, the Council’s action will allow for restrictions placed on several bank accounts held by the Seneca Nation and its businesses to be lifted. The accounts were frozen by New York State late last week, despite the state’s knowledge that the Nation’s secured account held more than sufficient funds to satisfy any compact-related matters. The state’s actions threatened the delivery of services, including healthcare and education, to the Seneca people, as well as the lives and livelihoods of thousands of Seneca and non-Seneca individuals and families across Western New York.

“The Seneca Nation simply could not stand by while New York State intentionally attempted to hold the Seneca people and thousands of Western New Yorkers hostage,” said Seneca Nation President Matthew Pagels. “The state may think it’s appropriate to force an elder to go without their diabetes medication or a family, already dealing with the financial impacts of the pandemic, to go without a paycheck. The Seneca Nation won’t let that happen. We will not let New York State strangle the people of Western New York.”

Along with the transfer of funds, President Pagels issued a clear demand for New York State to now begin compact discussions with the Seneca Nation.

“Don’t use the people of Western New York as pawns in your obvious desire to destroy the Seneca Nation,” he said. “You have an obligation under federal law to negotiate a compact with the Seneca Nation in good faith. Honor it.”

The Seneca Nation’s current gaming Compact went into effect in December 2002, granting the Nation the exclusive right to offer casino gaming in Western New York. Today, the Nation’s three casinos – Seneca Niagara Resort & Casino in Niagara Falls, Seneca Allegany Resort & Casino in Salamanca, and Seneca Buffalo Creek Casino in downtown Buffalo – employ approximately 3,000 workers, generating hundreds of millions of dollars in annual payroll and millions more in the purchase of goods and services from vendors and suppliers in Western New York, throughout the state and across the country.

“The Seneca Nation has led the way in revitalizing Western New York’s economy,” said President Pagels. “A crumbling state-owned convention center in Niagara Falls, a largely vacant former industrial site in Buffalo and former farmland in Salamanca have all been transformed into world-class destinations – built and paid for through the vision, determination and hard work of the Seneca Nation. The impact and benefit of this economic engine reach far beyond the Seneca Nation’s territories and far beyond just Western New York.”

While the Seneca Nation has invested more than $1 billion to develop its gaming enterprise in Western New York over the past 20 years, New York State has continually and dramatically changed the gaming landscape, from the operation of Video Lottery Terminals within the Seneca Nation’s defined exclusivity zone and the development of commercial casinos to the advent of online sports wagering and the State’s pursuit of additional mobile gaming initiatives. Those changes need to be reflected in a compact that meets the standards set forth in the federal Indian Gaming Regulatory Act, which established Indian gaming as a means for Native nations to build and strengthen their economies.

“Twenty years ago, the state promised the Seneca Nation exclusivity that never truly existed and which the state has intentionally erased even further at every opportunity,” said President Pagels. “Our compact must finally recognize the true condition of the gaming landscape, not New York’s empty promises and fictional benefits. If the Indian Gaming Regulatory Act is to be believed, then the federal government must hold our compact to the standard of ensuring that the Seneca Nation and the Seneca people are the principal beneficiaries of our gaming enterprise, so that our business supports our people and our Nation’s economic growth first and foremost.”

President Pagels has said repeatedly that the gaming compact is the Seneca Nation’s highest economic priority, and reiterated his call for New York State to begin discussions without any further delay. The current compact expires in December 2023.

“The Seneca Nation will not rest until we have a compact in place that secures the future of our gaming business in Western New York – for our Seneca people, for our thousands of dedicated employees, for our business partners, and for our neighbors,” said President Pagels. “We are not going anywhere and we will not tolerate a Governor and a state hell bent on crushing us. If that’s what the state expects, they couldn’t be more wrong. The time for honest compact discussions is long overdue. The Seneca Nation is ready. It’s time for New York State to come to the table. Let’s get started.”