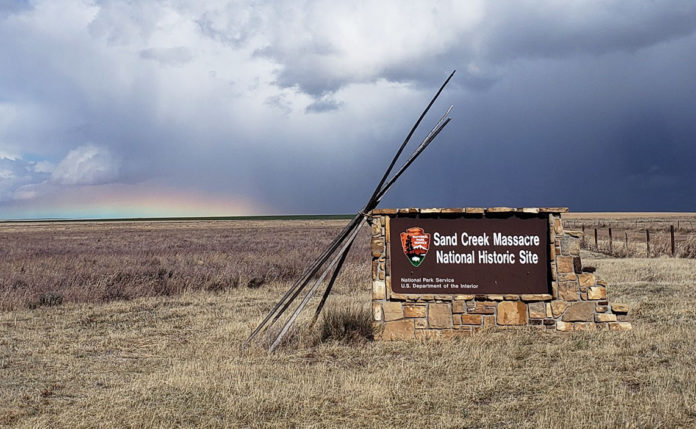 “It is our solemn responsibility at the Department of the Interior, as caretakers of America’s national treasures, to tell the story of our nation,” said Secretary Haaland. “The events that took place here forever changed the course of the Northern Cheyenne, Northern Arapaho, and Cheyenne and Arapaho Tribes. We will never forget the hundreds of lives that were brutally taken here – men, women and children murdered in an unprovoked attack. Stories like the Sand Creek Massacre are not easy to tell but it is my duty – our duty – to ensure that they are told. This story is part of America’s story.”

The ceremony included the announcement of the acquisition of an additional 3,478 acres for the National Historic Site was made possible through funding from the Land and Water Conservation Fund (LWCF). The additional land will allow NPS to increase public opportunities to experience and interpret the site’s stories and history. In addition, the expansion of the historic site will contribute to one of the most intact shortgrass prairie ecosystems within the National Park system, providing habitat for a wide range of plants, wildlife and species of special concern.  The Conservation Fund was critical to facilitating the acquisition from a willing seller, with financial support from Great Outdoors Colorado and the National Park Foundation.

“The newly acquired property will help to protect the historic site and sacred tribal lands,” said Janet Frederick, Sand Creek Massacre National Historic Site Superintendent. “These new parcels include lands listed on the National Register of Historic Places for their significance to the devastating events of November 29, 1864. These lands also have significant archaeological remains of the massacre, including evidence of the village where Cheyenne and Arapaho families were camped, and an intact viewshed that is key to the historical integrity of the National Historic Site.”

On November 29, 1864, U.S. soldiers attacked an encampment of approximately 750 Native people. During the attack, they took shelter in the high banks along Sand Creek. As they fled, many were wounded and killed. Well over half of the 230 dead were women and children.

Sand Creek Massacre National Historic Site was established in 2007 in southeastern Colorado near the Town of Eads. The site preserves lands where the massacre took place and adjacent features critical to the historic cultural landscape. The Northern and Southern Cheyenne and Arapaho Tribes consider these lands sacred.

The LWCF was established by Congress in 1964 to fulfill a bipartisan commitment to safeguard natural areas, water resources and cultural heritage, and to provide recreation opportunities to all Americans. The Great American Outdoors Act authorized permanent funding of LWCF at $900 million annually to  improve recreational opportunities on public lands, protect watersheds and wildlife, and preserve ecosystem benefits for local communities. The LWCF has funded $4 billion worth of projects in every county in the country for over 50 years.