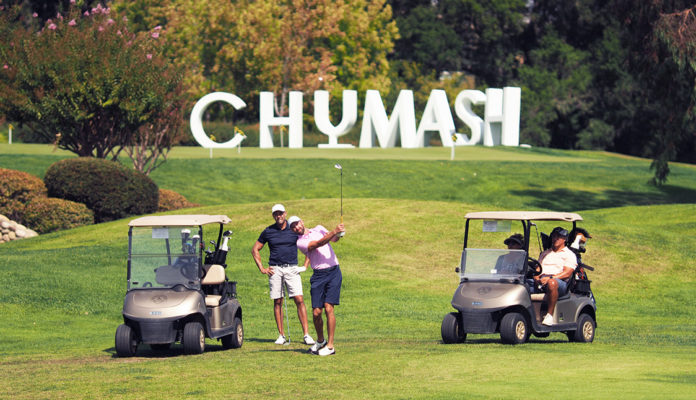 SANTA YNEZ, CA – The Santa Ynez Band of Chumash Indians announced that its upcoming 2022 Chumash Charity Golf Classic will raise funds for two local non-profits that are devoted to ensuring the health and well-being of those in need.

Proceeds from the three-day golf tournament, which will be held Sept. 20-22 at the Alisal Golf Course in Solvang, will go to Planned Parenthood California Central Coast and Good Samaritan Shelter in Santa Maria. A portion of the proceeds will also fund the Santa Ynez Band of Chumash Indians Foundation’s Technology in Schools Program, which is aimed at fulfilling high-tech needs in Santa Barbara County classrooms.

“These non-profits make a difference in our community,” said Kenneth Kahn, Tribal Chairman for the Santa Ynez Band of Chumash Indians. “Whether it’s providing reproductive health care or offering community programs that address homelessness, as well as alcohol and substance abuse, we are proud to donate funds to their respective causes through our Chumash Charity Golf Classic.”

Good Samaritan Shelter is seeking funding for its Safe House Program, a 16-bed safe house for female survivors of human trafficking. This is the shelter’s most underfunded program, but one of its most utilized.

“Good Samaritan Shelter is so honored to have been selected as a beneficiary for this year’s Chumash Charity Golf Classic,” said Kirsten Cahoon, Director of Shelter Operations for Good Samaritan Shelter. “Good Samaritan is on the front lines of serving the homeless throughout Santa Barbara County, and this contribution will assist our agency in serving as many vulnerable individuals and families as possible.”

Since 2016, the tribe’s volunteer program, Team Chumash, has held a monthly volunteer event at the Santa Maria shelter, cooking and serving dinner.

Since its inaugural event in 2005, the Santa Ynez Band of Chumash Indians’ annual golf tournament has raised more than $1.8 million for local charities and non-profits. Past beneficiaries include the Teddy Bear Cancer Foundation, Dream Foundation, Court Appointed Special Advocates (CASA) of Santa Barbara County, Lompoc Family YMCA, Unity Shoppe, and local schools and museums. The Santa Ynez Band of Chumash Indians has donated more than $25 million to hundreds of groups, organizations and schools in the community and across the nation as part of the tribe’s long-standing tradition of giving.