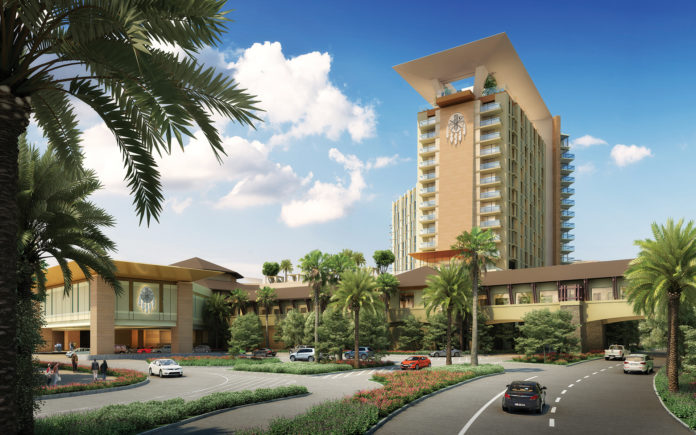 HIGHLAND, CA – The San Manuel Band of Mission Indians hosted an intimate ceremony to celebrate the topping-off of the 17th floor of the San Manuel Casino resort expansion project. The socially-distanced event celebrated the final steel beam being put into place just over 27 months after the project broke ground on July 25, 2018. During the event, the tribe announced an updated timeline for the phased opening of the expansion.

“This endeavor advances the continued development of our tribal government and economy, and as importantly, creates permanent jobs and opportunities for the region – which is our home,” said Ken Ramirez, Chairman of the San Manuel Band of Mission Indians. “Today we take an important step toward these goals, and recognize the hard work of our team who is helping us get there. We look forward to sharing our tribe’s vision of hospitality with our guests in this new expansion.”

Several Tribal leaders and Executive Leadership spoke to the small audience including San Manuel Band of Mission Indians Chairman Ken Ramirez and several members of the Business Committee. The topping-off event was commemorated by wrapping the final beam with tarps that were signed by Tribal Citizens and San Manuel team members before being placed at the top of the structure.

San Manuel Casino’s resort expansion announced the following updated timeline: Phase One – the opening of the casino’s expanded gaming space plus a 24-hour restaurant and a high-end dining venue as well as three new retail shops is scheduled for summer 2021.

Phase Two – the opening of San Manuel’s first onsite hotel in winter 2021 will feature 429 luxury rooms and suites as well as additional food and beverage options, a full-service spa and a pool deck featuring its own bar and private cabanas.

Phase Three – the opening of San Manuel’s event venue is currently scheduled for 2022.

The San Manuel Casino resort expansion is expected to add more than 2,000 new team members to its current headcount of 4,500. San Manuel Band of Mission Indians is currently a top-10 private employer in San Bernardino County.