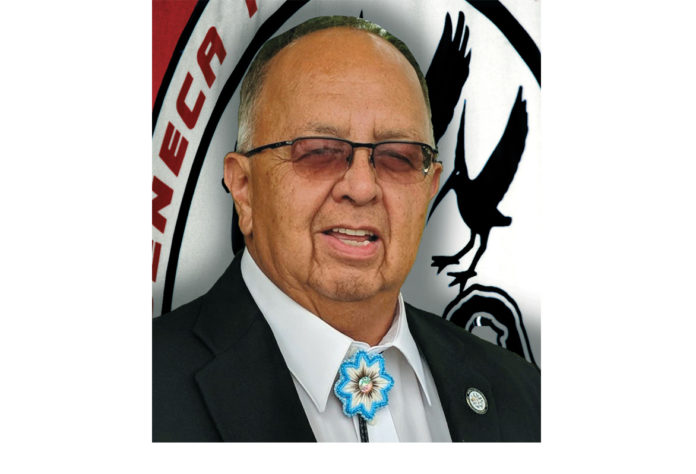 IRVING & SALAMANCA, NY – Rickey Armstrong, Sr., a two-time former Seneca Nation President and current Seneca Nation Treasurer, was elected as the Nation’s next President in voting on the Seneca Nation’s Allegany and Cattaraugus Territories. Armstrong received 1,108 votes, leading a Seneca Party sweep of all races on the general election ballot.

“I am humbled by and grateful for the support and trust the Seneca people have shown in choosing me to lead our Nation,” said Armstrong. “I will work every day to honor their trust. As President, I will focus on the issues and opportunities that will define our future and shape the quality of life on our territories, from dealings with outside governments to advancing important economic development initiatives. Defending our sovereignty and securing the long-term strength and prosperity of our Nation and our future generations will always be our priority.”

Armstrong will be officially sworn in for his two-year term next week. He previously served as President from 2002-2004, when the Nation opened its first two gaming operations – Seneca Niagara Casino in 2002 and Seneca Allegany Casino in 2004 – and again from 2018-2020, leading the Nation through the first several months of the COVID-19 pandemic. He has served as Seneca Nation Treasurer since 2020, and has also served multiple terms on the Seneca Nation Council.

“Serving the Seneca people is a tremendous honor,” said Pagels. “I look forward to working with all members of Council, Clerk Johnson and President Armstrong in continuing to advance the interests of our people and our Nation.”

The newly elected and re-elected Councillors will join the eight incumbent Councillors, whose terms expire in 2024. They include Joshua Becker, Arlene Bova, Al E. George, and Timothy Waterman from the Allegany Territory; and Eliot Jimerson, Lisa Maybee, Presley Redeye, and Keith White, Sr. from the Cattaraugus Territory.