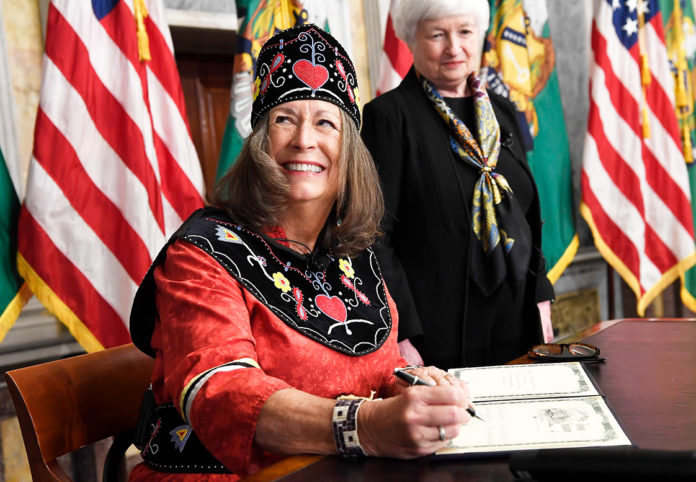 WASHINGTON, D.C. – Mohegan Chief Lynn Malerba has been sworn in as the 45th United States Treasurer, making history as the first Native American to hold the position.

In prepared remarks, Secretary of the Treasury Janet Yellen said, in part, “Appointed by President Biden, Chief Malerba is the first Native American to serve as Treasurer. Soon – for the first time in our history – a Native woman’s signature will be on our nation’s currency.”

“The Biden-Harris Administration has made a commitment not just to Indian Country, but to all of America to improve our communities,” said Malerba. “It is a worthy goal to ensure that everyone in this United States enjoys a stable income, stable housing, good schools, and ultimately a fair shot at life at creating some wealth for the next generation so that they don’t struggle as perhaps the previous generation. This can only happen when all voices are heard and respected – and when policy reflects those voices.”

“There are few more suited for the challenge of leading this office than Chief Malerba,” said Yellen. “As many of you know, Chief Malerba is the 18th and Lifetime Chief of the Mohegan Tribe. She made history as the first woman chief in the tribe’s modern history. And even as we welcome her into this new role, I am glad to say that Chief Malerba is no stranger to Treasury. Chief Malerba was an inaugural member of Treasury’s Tribal Advisory Committee, a seven-member committee that advises the Treasury Secretary on tribal taxation and related issues. I have greatly appreciated her advice in that role. And I am grateful to have even more of her counsel in this new one.”

“We all know that, historically, many promises have not been kept to the indigenous peoples of this nation,” said Malerba. “But we can and will do better. My appointment is a promise kept. My appointment demonstrates respect for tribal sovereignty and a clear understanding of the political relationship between the United States and our Native nations.”