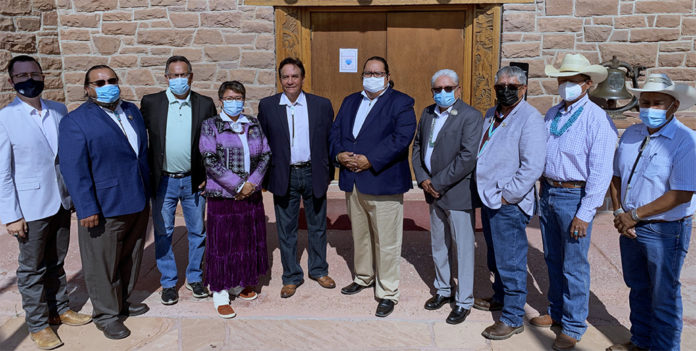 WINDOW ROCK, AZ – Honorable Speaker Joe Byrd of the Cherokee Nation joined the 24th Navajo Nation Council on Recognition Day of the 2021 Summer Session in Window Rock, AZ. The Cherokee Nation traveled to the Navajo Nation to continue a discussion on a proposed treaty between the two nations, which will exercise their sovereignty to enter into inter-governmental relations to support one another.

“As tribes who survived the Long Walk and the Trail of Tears, we are survivors,” said Speaker Byrd as he addressed the 24th Navajo Nation Council. “But as longtime allies, if we work together, there’s nothing we can’t accomplish.”

Byrd spoke on the idea of the two great tribal nations merging forces to combat not only post COVID-19 pandemic, but the future health of both tribes.

“The [proposal] talks about what would the world think if two of the largest nations represent close to one million people came together and talked about how we could help each other out in the area of health care, jurisdiction, law enforcement, domestic violence against women,” said Speaker Byrd.

Prior to the proposed treaty renewal, the Cherokee Nation generously donated to the Governor Richardson-Peterson Zah COVID-19 Navajo Families Relief Fund who was able to purchase and deliver Nike shoes to Navajo children. To show appreciation, both the Navajo Nation and Cherokee Nation presented and exchanged gifts in honor of the continued support for one another.

“On behalf of the 24th Navajo Nation Council, we would like to thank Speaker Byrd of the great Cherokee Nation for your visit, continued support, and gracious words,” said Speaker Damon. “Our delegation is trying to adapt and seek ways to work together and advocate for each other as sovereign nations to continue to progress forward as successful nations, Ahéhee’.”