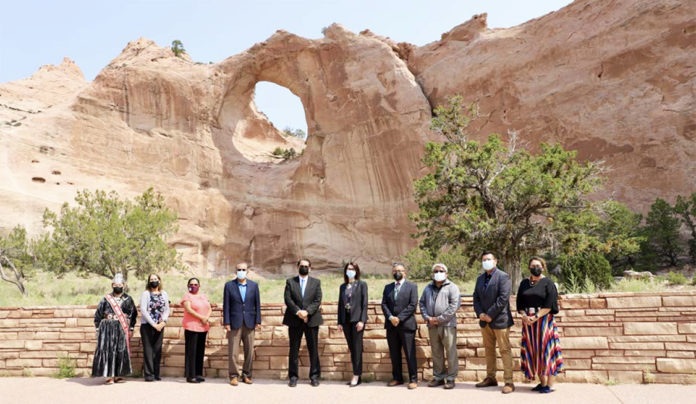 The discussion served as a follow-up to a recent visit by President Nez and Lt. Gov. Henderson to a community near Blanding, UT, known as the Westwater Subdivision, on July 22. During that visit, they met with several Navajo families who live without electricity and running water within the 120-acre plot of land that was purchased by the Navajo Nation in 1986. The area still lacks basic infrastructure for the homes of 27 Navajo families.

“We have to get water and electrical infrastructure to the families that reside in the Westwater Subdivision,” said President Nez. “It’s been talked about for years and now it’s time to take action and we are on the path to getting it done. The COVID-19 pandemic has consumed so much of our time and resources for over a year now, so we are now doing our best to refocus on the priorities that were outlined at the start of this administration. We are thankful that Lt. Gov. Henderson has continued to make the Westwater Subdivision a top priority and that is evident by her visit today.”

This year, the Utah State Legislature approved $500,000 in the state’s FY 2022 budget to help bring electricity to the Westwater Subdivision, which was then signed into law by Utah Gov. Spencer Cox. Navajo Tribal Utility Authority is currently working with Utah Associated Municipal Power Systems and the city of Blanding on several options, including the possibility of extending powerline infrastructure from Blanding’s electric system to the Westwater Subdivision.

“I appreciate the warm welcome we received in the Navajo Nation’s capital city today,” said Lt. Gov. Henderson. “The purpose of our visit was to seek input from President Nez on a joint plan to deliver running water to Westwater. I appreciate his leadership and commitment to Utah-Navajos as we work together to bring essential infrastructure to people who should have had it long ago.”

Several Division Directors under the Nez-Lizer Administration also provided updates to Lt. Gov. Henderson related to: the Gentle Ironhawk Shelter in Blanding, UT, which is in the process of reopening under the Utah Navajo Health System; continued support for provisions under the Indian Child Welfare Act in cases involving Navajo children in the state of Utah; ongoing broadband connectivity initiatives; road projects and improvements; continued coordination for COVID-19 relief; public safety needs; and other issues.

“We appreciate the partnership of Lt. Gov. Henderson, Director Jansen, and all of their staff,” said Vice President Lizer. “As this process moves forward, we will continue to look to the county and local leaders for support as well. It will take all of us working together to deliver water and power to the Westwater Subdivision to improve their quality of life and provide much-needed relief. Thank you to Utah Gov. Spencer Cox for his support as well.”