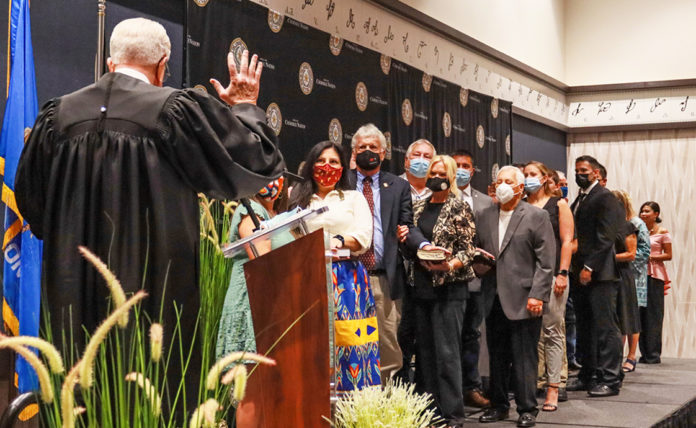 “I’ve said before that a strong and effective Cherokee Council means a strong and effective Cherokee democracy,” Principal Chief Chuck Hoskin Jr. said. “At its best, the Council is a place for ideas to take shape, a place where citizen legislators can gather and debate critical issues, and where they can advocate for their constituents as they reach a consensus on how the Cherokee Nation should progress forward. I believe the new and returning Councilors will help further the tribe’s efforts at providing a more sustainable and efficient government and keeping our sovereignty secure for our Cherokee citizens. I look forward to working toward that common goal as this new Council begins the important work of the Cherokee people.”

“I’ve always had this in my heart to do this someday,” said Sam. “Now finally being here, I just have so much gratitude to those who helped me and allowed me to be here today.”

“I’m 64, but I feel like I’m an 18-year-old senior starting his first football game,” said Callison. “The campaign was hard, but just to have the ability to help people, to help the people in my district, and to move the Cherokee Nation forward is too exciting.”

“I ran for office to represent the people of District 2 and to help improve access to our services for our citizens. That’s really what I’m most excited about,” said Tehee. “I’m also excited about helping to strengthen our language program, and to focus on improving education about Cherokee culture for our citizens as well.”

The tribe’s legislative branch consists of a 17-member Tribal Council representing the 15 districts inside Cherokee Nation’s reservations and two at-large seats representing citizens who live outside the boundaries. Members are elected by popular vote to four-year terms.

“Hopefully we can make everyone’s lives better and really work together and do some great things on the reservation and at large,” said Kidwell. “I definitely look forward to working with Secretary of Veterans Affairs Joe Crittenden on anything and everything that I can do to be helpful in promoting of veteran issues.”