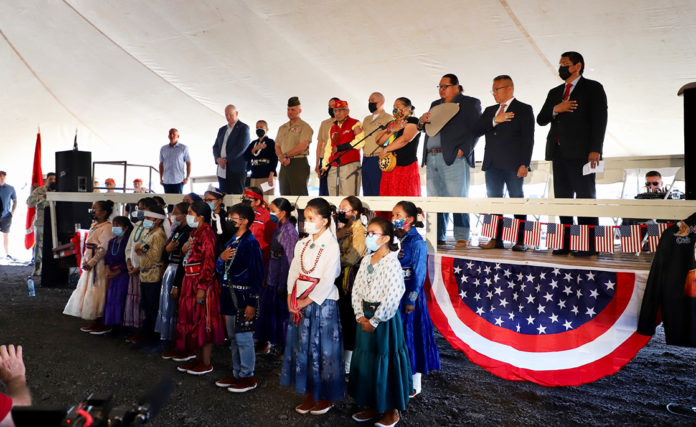 “We pay tribute to all Navajo Code Talkers for their courageous service in World War II and beyond,” said President Nez. “At the time of their enlistment, they were young Navajo men who answered the call of duty and unknowingly built a legacy for the Navajo people. Their contribution to the country is recognized throughout the world. They used our sacred Navajo language to help win the war and protect the freedom that we have today. Many of them have gone to their final resting places, but their service and efforts will forever be remembered and cherished for many generations. Today, we are blessed to have three surviving Navajo Code Talkers, including Thomas H. Begay, John Kinsel Sr., and former Chairman of the Navajo Nation Peter MacDonald, Sr. We also commend them and their families for breaking ground to build the very first Navajo Code Talker Museum in the country. The museum will tell the legacy of our Navajo warriors, and our children and grandchildren will have the opportunity to learn and remember how resilient we are as Diné people.”

“In 1942, 29 Navajo Code Talkers developed an unbreakable code that would win the war in the Pacific and save millions of lives worldwide,” said Speaker Seth Damon. “The Navajo Nation appreciates Code Talker Peter MacDonald and the late Samuel Sandoval for leading the charge to get us here today. This museum and veterans center should have been completed years ago, and it will be a gathering place to hear their stories. We now break ground to make this massive project a reality, and we are forever grateful to our Navajo warriors in uniform for protecting our freedom and way of life.”

In 2019, the Navajo Nation received over $1 million to assist with the design and construction of the Navajo Code Talker Museum from the State of New Mexico, which was of great importance to the late New Mexico State Sen. John Pinto. During the event, Speaker Damon and President Nez shared their joint commitment to support the Navajo Code Talkers and their families.

“Today we pay tribute to our Navajo Code Talkers and our veterans for their contributions to our Diné people,” said Chief Justice JoAnn Jayne. “We look forward to the opening of the National Navajo Code Talkers Museum to pay homage to our brave warriors and commemorate their heroic actions using our Diné language. We are united in supporting this accomplishment and are thankful to all those who have worked and who will continue to work to make this dream a reality.”

“The Marine Corps has an enduring 80-year relationship with the Navajo people and Indian Country,” said Lt. General Bellon. “We value tradition just as the Navajo Nation does. The story of the Navajo Code Talkers must be told. They were on the frontlines reporting battle information through a sacred code to our generals and decision-makers. The Diné language was vital to our victory in the Pacific, and we remember that sacrifice today. The unbreakable code now is about love for family and community, love for country, and a commitment to protect our liberty.”