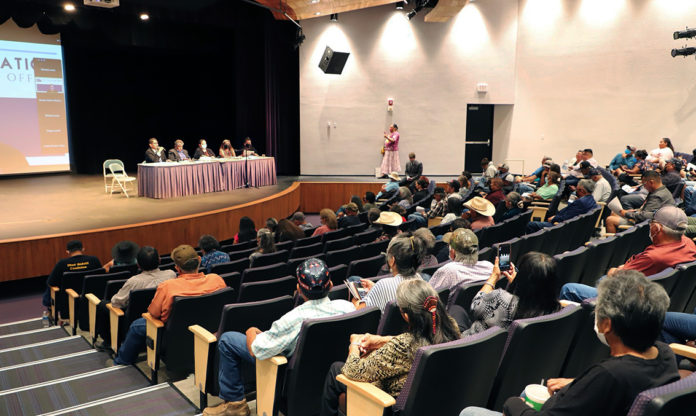 President Nez and members of the 24th Navajo Nation Council successfully advocated for a two-year extension of RECA, which was signed by U.S. President Joe Biden in June. The short-term extension provides more time to work with congressional members on a long-term solution that would extend the Act until 2040, expand downwinder eligibility based on geographic residency and expand the range of years that can be used for calculating exposure for certain individuals working in uranium mines, mills, or transporting uranium ore.

“The Navajo people continue to deal with the sad and devastating legacy of uranium mining and exposure,” said President Nez. “Today, we received a lot of passionate and heartfelt feedback and concerns from our Navajo people, and we will keep their words close to our hearts and minds as we continue to advocate on their behalf at the federal level. The federal government is obligated to helping our people who are suffering with health conditions resulting from the federal government’s uranium activities decades ago. The Navajo Nation Washington Office held the forum so that our people could share their issues directly with leadership.”

During the forum, citizens shared firsthand accounts of the devastating health and environmental impacts caused by the federal government’s uranium mining along with the challenges of applying for benefits for themselves and family members who were exposed to uranium in the past. The extensive exposure to uranium has led to increased rates of cancer and other health conditions in many communities across the Navajo Nation.

In addition to working on the RECA long-term extension, President Nez spoke about the establishment of the Navajo Nation’s very first cancer treatment center in Tuba City, AZ, which provides treatment to many Navajo residents. He acknowledged that there is a greater need for more cancer centers in other regions to provide services closer to home for the Navajo people.

Navajo Nation Washington Office Executive Director Lashawna Tso thanked the leaders and the Navajo Uranium Radiation Victims Committee for their collective efforts to address uranium exposure issues, and emphasized that the Washington Office will continue to coordinate with victims and federal officials to increase access to benefits and to advocate for the approval of the RECA long-term extension.