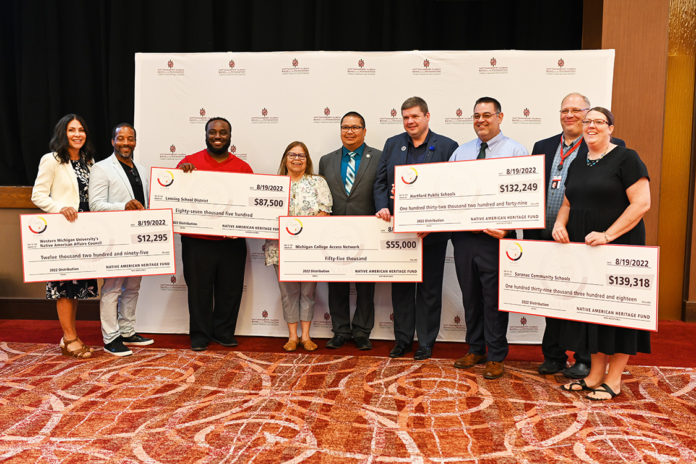 NAHF Chairperson Jamie Stuck started off the event praising the collaboration between the NAHF and representatives from the local, state and federal levels to provide solutions – not just point out problems.

“For a state and a sovereign nation to work together to help provide solutions that are affecting all 12 sovereign nations of the State of Michigan is nothing short of remarkable,” said Stuck. “Hopefully these types of initiatives are a glimpse into what is to continue in the future generations ahead at the national level.”

“The courage of the schools represented here today and their communities should particularly be noted,” said Engle. “Moving away from inappropriate mascots demonstrates another elevation of the respect for the culture, history and identity of Michigan’s Native American populations. The positive relationship between Michigan and the federally recognized tribes should be a blueprint for the rest of the country. What’s evidenced here this afternoon, ultimately, is that when people sit down with good intentions and work to understand each other, we can move society forward successfully in a way that honors dialogue, respects differences and celebrates common humanity.”

“We hope in the future to totally retire the ‘R word’ from the State of Michigan,” said Stuck. “Before the NAHF board got started, we had six schools within the state using the ‘R word.’ With NAHF funding, now we’re down to two remaining – Sandusky and Camden-Frontier. Those are two more schools we need to concentrate on and get those mascots retired once and for all. Let’s be the first state in the country to not have the ‘R word’ in use.”

Saranac Community Schools Superintendent Jason Smith, along with Stephanie Smith, the Saranac Schools Instructional Leader and his wife accepted $139,318 to rebrand their mascot and reevaluate their curriculum.

“It was almost 30 years ago to the month that I remember the first initial discussion of changing the mascot when Stephanie and I were juniors in high school,” said Smith. “It’s been a long process, but we’re so pleased today to be here to accept this and have our community transition. We had students in the building yesterday who were pretty excited as they’re officially the first Red Hawks.”

“This is something that needed to happen,” said Brandon. “There is never a wrong time to do the right thing.”

Overall, the NAHF has provided over $1.5 million for changes to mascots and imagery alone.

“Now it’s about the healing,” said Stuck. “This decision makes a big divide in communities and that’s a part of it, not just the education and making the mascot change, but moving forward with healing and doing so in a respectful way.”

September 28, 2022
MARKSVILLE, LA – The Tunica-Biloxi Tribe of Louisiana and the City of Marksville signed an agreement transferring ownership of the Marksville Historic...

September 28, 2022
SEATTLE, WA – The King County Council voted unanimously in favor of a landmark settlement with the Suquamish Tribe to redress the...