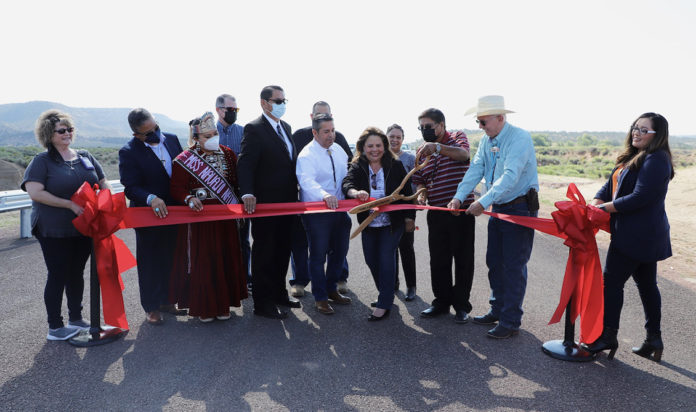 MANUELITO, NM – Navajo Nation President Jonathan Nez and Vice President Myron Lizer recently joined U.S. Sen. Ben Ray Luján (D-NM) and other federal/state leaders and local residents to celebrate the replacement of the Manuelito Canyon Bridge that serves many Navajo residents. The previous bridge was washed out due to heavy rainfall in 2010, requiring many residents to use alternative routes.

“We are very happy for the community of Manuelito, for their local leaders and most of all, the families who reside here,” said President Nez. “It took the efforts and hard work of Sen. Luján, New Mexico state leaders and agencies, McKinley County, and the strong advocacy of Manuelito Chapter leaders to get the approvals, funding, and support to construct the new bridge. The roadway is now accessible for families, students, first responders, and many others who rely on the bridge to commute on a daily basis. Congratulations to the Manuelito community.”

Sen. Luján spoke about the challenges associated with gaining approval for the easements and other requirements to move the project forward and thanked all of the leaders for their support. Following the washout in 2010, Sen. Luján hosted several meetings with representatives from McKinley County, FEMA, the Navajo Nation, the Bureau of Indian Affairs, and the Department of Transportation to discuss repairing the Manuelito Bridge.

“Since the Manuelito Canyon Bridge was washed out, my office worked with state, tribal, and federal leaders to work together to reconstruct this bridge – a project a decade in the making. Today, the bridge is now open,” said Sen. Luján.

Construction of the project began in December 2019 with an overall cost of $3.2 million from various funding sources including funds secured by McKinley County and state leaders and from the Navajo Nation’s roads funds. Navajo Division of Transportation Executive Director Garret Silversmith was also in attendance to offer his support and to congratulate the Manuelito community and residents.

“We thank everyone who laid their hands to this great work,” said Vice President Lizer. “It’s wonderful to see so many entities working together to bring this project to fruition. We are seeing progress with many road and infrastructure projects across the Navajo Nation. Thank you to everyone who was involved in this successful effort to make our transportation system stronger and more beneficial for everyone.”

The Navajo Nation also recently celebrated the completion of a newly-constructed two-lane concrete bridge along N9402 in the community of Tsé Si áni, AZ located approximately 22-miles south of Window Rock, AZ. The Navajo Division of Transportation continues to make progress on road and bridge projects in many other communities on the Navajo Nation.