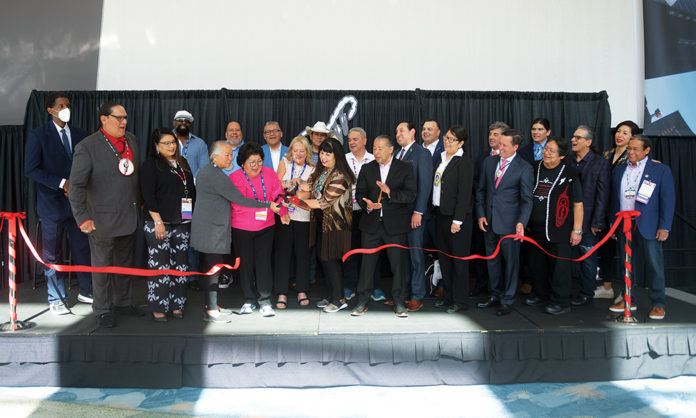 The Executive Board discussed an array of gaming and legislative issues and updates and organizational re-branding, including an organizational name change. The organization’s new name is now the Indian Gaming Association (IGA). IGA Chairman Ernie Stevens, Jr. Stevens said, “While we will continue to be the same prevalent organization working on behalf of our tribal government gaming industry, this change reflects both the evolution of the times and this organization’s vision for the future.”

On April 20, the membership heard two important panel discussions and a tribal leaders panel discussion entitled Sports Betting Across Indian Country, moderated by Jason Giles, Executive Director of the Indian Gaming Association, with panelists including Mark Macarro, Chairman of the Pechanga Band of Luiseño Indians, Bernadine Burnette, President of the Fort McDowell Yavapai Nation, Stephen Lewis, Governor of the Gila River Indian Community, Brandon Yellowbird Stevens, Vice-Chairman of the Oneida Nation of Wisconsin and Rodney Butler, Chairman of the Mashantucket Pequot Tribal Nation. The agenda concluded with the Women in Leadership: Tribal Government Gaming panel, moderated by Danielle Her Many Horses, IGA Deputy Director, with panelists including Stephanie Bryan, Chairwoman of the Poarch Band of Creek Indians, Bernadine Burnette, President of the Fort McDowell Yavapai, Shannon Holsey, President of the Stockbridge-Munsee Band of Mohican Indians and Fawn Sharp, Vice President of the Quinault Indian Nation, and President of the National Congress of American Indians.

Faith Keeper of the Onondaga Nation and long-time leader of the Haudenosaunee lacrosse team, Oren Lyons, was honored with the Lifetime Achievement Award at the Chairman’s Leadership Luncheon. Former Viejas Band of Kumeyaay Indians Chairman Anthony Pico was honored with the Rick Hill-Tim Wapato Sovereign Warrior Award at the evening’s cultural event.

On April 21, the tradeshow ribbon-cutting event was kicked off with an informal discussion between IGA Chairman Ernie Stevens, Jr., and American Gaming Association (AGA) President and CEO Bill Miller. Tribal leaders and guests joined in the official ribbon cutting, which ushered attendees onto the tradeshow floor.

“The success of this year’s event is because of our industry’s remarkable perseverance and resiliency,” said Chairman Stevens. “Over the past two years, we have shown our determination to come back strong. It was phenomenal to be together again because we have much to celebrate. We rolled up our sleeves addressing new challenges and opportunities, continuing our work to protect tribal sovereignty and strengthen Native communities.”

For more information about the Indian Gaming Association, visit www.indiangaming.org.