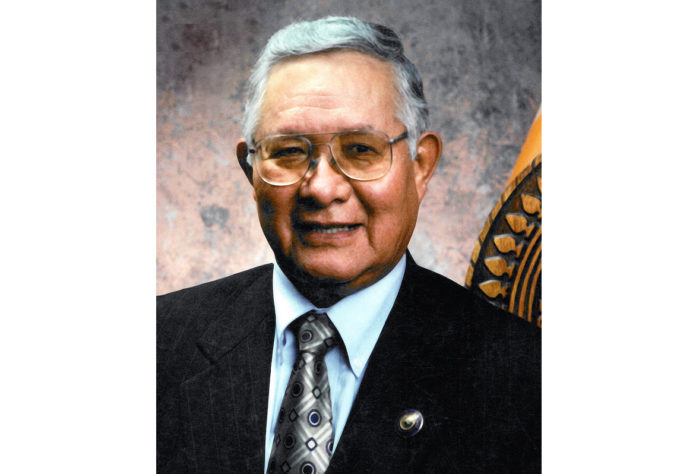 “On behalf of the Navajo Nation, we offer our condolences and prayers to Honorable Begay’s family,” said President Nez. “We also thank his loved ones for sharing his life with us and for all of their family’s contributions to our Navajo people. He was a very loving and caring person who always put the people first. We pray that his family takes comfort in knowing that he is with God and watching over them now.”

“Speaker Ed T. Begay cared for the Navajo people and worked tirelessly for us all,” said Speaker Seth Damon. “The Navajo Nation mourns the loss of a compassionate, great leader and we honor his life today. Through his steadfast leadership, Speaker Begay pushed forward legislation to protect our natural resources, water, and land, while also strengthening the sovereignty of the largest Tribal Nation in the United States. We offer our sincere condolences to those he loved and send prayers of protection for his family during this time.”

Speaker Begay was Tódích’íi’nii and born for the Tl’ogi clan. His maternal grandfather was Táchii’nii and his paternal grandfather was Kinyaa’áanii. He grew up in the Nose Rock area of what is now called “Superman Canyon” in New Mexico. In 1962, Speaker Begay married his high school sweetheart, Cecilia M. Damon, who passed away in 1991. Together, they had two daughters, Sharlene Begay-Platero and Sandra Begay, and a son-in-law, John Platero, Jr.

“That’s a sad moment for all who had the honor of working with him,” said Chairman Daniel Tso. “He frequently talked about his shepherding days. He transformed that into his sheep herder philosophy. Throughout the years, we learned of the many facets of that philosophy. Our Cheii will be remembered as a gracious, and at times, formidable leader. He always sought the best for our beloved Navajo people. To his children, grandchildren, and relatives, know that our Cheii set an example that we all will try to emulate. Our prayers and condolences are sent in a manner to bring comfort to those he loved.”

From 1971 to 1983, Speaker Begay represented the Church Rock and Bread Springs Chapters on the Navajo Tribal Council. During his career as a Council Delegate, Begay chaired the Advisory Committee, the Education Committee, the Economic Development and Planning Committee, the Budget and Finance Committee, and the Federal Restructuring Task Force. He is credited for developing the Permanent Trust Fund to build a more self-sufficient Navajo Nation and is the author of Title 26, which created the Local Governance Act.

“Speaker Ed T. Begay made sure the Executive Branch and Legislative Branch worked together on behalf of the Navajo people,” said Council Delegate Edmund Yazzie. “He deeply cared for the communities he represented on the Navajo Tribal Council and was the author of several legislations. He was a loving father, grandfather, and beloved husband who was revered for his leadership and kind spirit. Speaker Begay leaves behind an impressive legacy of public service that impacted Navajo history. He is a statesman and a man to honor.”

In 1982, former President Peterson Zah and Speaker Begay were elected and served from 1983 to 1987. As Vice Chairman, Begay became an outspoken advocate for the protection of tribal sovereignty and the issues affecting Native communities across the U.S.