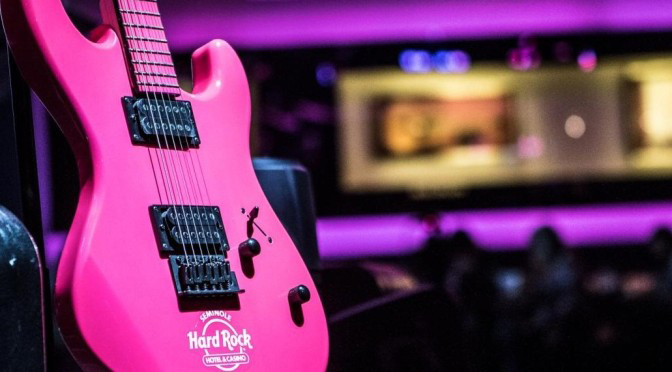 HOLLYWOOD, FL – Hard Rock International, owned by The Seminole Tribe of Florida, announced its continued support for breast cancer awareness and research with its 22nd annual Pinktober campaign taking place throughout the month of October. Through the Hard Rock Heals Foundation®, all company divisions including Hard Rock Cafes, Hotels and Casinos worldwide will be partaking in the campaign with limited-edition merchandise, food and beverage menu items, local events and more. Hard Rock continues to live out its mottos of “Love All – Serve All” and “Take Time To Be Kind” with its steadfast support throughout Breast Cancer Awareness Month, with the goal of lending a hand to the people and communities that need it most.

This year, Hard Rock International will be offering uniquely designed, limited-edition merchandise in support of breast cancer awareness and research, which include a Pinktober-themed Hard Rock T-shirt and a newly designed Pinktober pin. Additionally, through the Hard Rock Heals Foundation, a percentage of all proceeds will be going to charities that help raise awareness and funds for breast cancer research.

Players on Hard Rock Digital’s free “Hard Rock Social Casino” game will determine how much is donated to the Hard Rock Heals foundation in honor of Pinktober. The more players spin, the more the donation amount increases starting at $1,000 for 25 million community spins and increasing at regular intervals up to a $10,000 top donation.

A line-up of community driven local events and immersive on-property activations round out Hard Rock International’s Pinktober programming. At several Hard Rock Hotels around the globe, pink Fender guitars will be added to the brand’s notable Sound of Your Stay® music program, allowing guests the unique opportunity to check out a complimentary guitar on site.

Guests of the Hard Rock Hotel Daytona Beach can see pink in one of four room takeovers featuring pink sheets, towels, flowers, a pink welcome amenity, and a custom pink Fender guitar available for jam sessions. Ten percent of the revenue received from these rooms will go to breast cancer awareness.

Seminole Hard Rock Hotel & Casino Hollywood, FL, along with two of its sister properties in Florida, are joining together to sponsor their local American Cancer Society – Making Strides Against Breast Cancer Walk. Hard Rock Hotel & Casino Atlantic City is a flagship sponsor for their local walk, as well as a mammogram van onsite to provide free screenings every Wednesday in October, and will turn table games felts pink. Additionally, colorful on-property displays at Hard Rock Hotels & Casinos showcase thoughtful pops of pink such as lighting the iconic Hard Rock guitars throughout October.

Hard Rock Hotels & Casinos continues its worldwide support of Pinktober with one-of-a-kind fundraising events across the brand’s international hotel and casino portfolio. Kicking off the charitable celebrations is the Raise Your Voice Against Cancer Karaoke Event on Wednesday, Sept. 29 at DAER Nightclub at the Seminole Hardrock Hotel & Casino in Hollywood, FL.

Additionally, throughout the month of October, participating Hard Rock Cafe® locations in North America and Europe will offer a special menu consisting of three burgers and a cocktail. A portion from every burger sold will go to the Hard Rock Heals Foundation to support Pinktober and global charity partners the American Cancer Society and the Caron Keating Foundation.

“As we enter our 22nd year of this campaign, we do not underestimate the importance of the continued promotion of Breast Cancer awareness and research,” said Jon Lucas, Chief Operating Officer of Hard Rock International. “Hard Rock International is proud to lend steadfast support toward this global issue and will continue to spread the message of courage and hope among fighters, survivors and their loved ones on a local and global scale.”