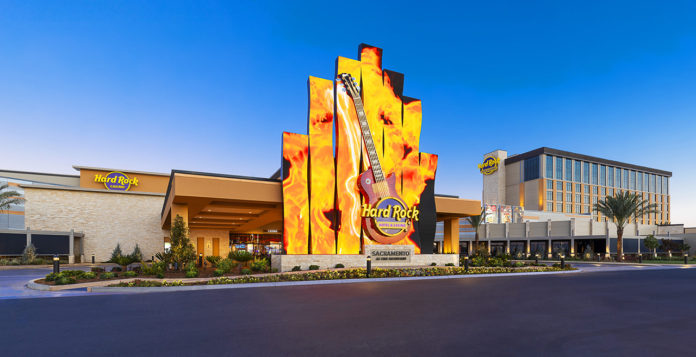 SACRAMENTO, CA – Hard Rock Hotel & Casino Sacramento at Fire Mountain and Live Nation have announced a partnership for Hard Rock Live, the property’s new state-of-the-art indoor concert venue scheduled to open late Spring in Sacramento, CA. Hard Rock will own and operate the building, while Live Nation will exclusively book and promote all shows at the new premiere venue.

Hard Rock Live will be located on the north side of the current property adjacent to the existing Kumi Events Center. The entire site will occupy 65,000 sq. ft. and will feature up to 2,500 seats or 3,000 occupants for general admission. A state-of-the-art audio-visual entertainment venue, the Hard Rock Live aims to be the region’s premier music, comedy and concert destination. It will also serve as a multi-purpose event center with the capability to host a multitude of programs including meetings and tradeshows, boxing and MMA, marketing promotions, and charity and large-scale catered events. The venue will also include a second level mezzanine with VIP skyboxes and balcony seating, creating an intimate setting that will offer compelling experiences and sightlines. In Hard Rock fashion, it will also feature dozens of new memorabilia displays from some of the most iconic performers in the music industry for guests to enjoy.

“Entertainment is the foundation of the Hard Rock brand as experienced at our many locations around the world,” said Mark Birtha, President of Hard Rock Hotel & Casino Sacramento at Fire Mountain. “Attending a live music event is not only exhilarating, it creates memories that will last a lifetime. We are excited to partner with Live Nation in Northern California to bring Hard Rock Live to Sacramento. This is the next phase of our local partnership that will bring ‘authentic experiences that ROCK’ to fans of both brands.”

“We are very excited to form a partnership with Hard Rock Live,” said Jodi Goodman, President of Live Nation Northern California. “We look forward to booking a compelling and diverse line-up of memorable concerts and live events in the growing Northern California market.”

Hard Rock Live will additionally serve as a community resource in regional emergencies. The facility has been designed to serve as an emergency shelter for up to 1,000 people, if needed. This need arose after the Feather River Valley experienced a regional threat by the Oroville Dam in February 2017. That experience weighed in the design of the building by the tribal ownership, leaders of the Estom Yumeka Maidu Tribe of the Enterprise Rancheria.