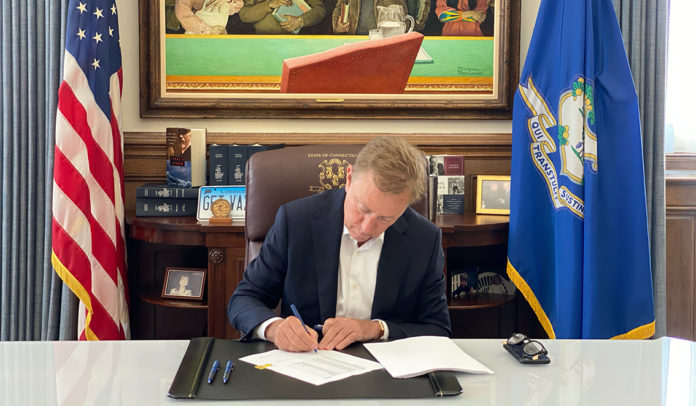 HARTFORD, CT – Governor Ned Lamont has signed into law legislation that will legalize online gaming and sports wagering in Connecticut. The legislation, which received strong bipartisan support in both chambers of the Connecticut General Assembly, comes as a result of an agreement the Lamont administration reached earlier this year with the Mohegan Tribe and Mashantucket Pequot Tribe allowing both tribes and the Connecticut Lottery Corp. to offer online gaming and sports wagering.

Now that the bill has been signed into law, the Lamont administration and the tribes will seek approval from the Bureau of Indian Affairs at the U.S. Department of Interior to amend the state’s compact with the tribes. The federal agency must approve the changes to the compact before online gaming and sports wagering can begin in the state.

“By signing this bill into law, Connecticut is now on the cusp of providing a modern, technologically advanced gaming experience that will be competitive with our neighboring states and positions us for success into the future,” said Lamont. “Today, we celebrate the result of months of hard work and dedication toward an agreement that is best for the residents of Connecticut and the respective tribal members. I thank all of the legislators on both sides of the aisle who recognized what this deal means for our state and voted to send this bill to my desk. I also appreciate the partnership of the Mohegan Tribe and Mashantucket Pequot Tribe for collaborating with my office so that we could make this happen for the residents of our state. I am confident that the federal government will see fit to approve these amendments to our compact, and in the coming months we can launch a modernized, 21st century gaming experience in Connecticut.”

“The Mohegan Tribe is thankful to Governor Ned Lamont and our partners in the General Assembly for their cooperative efforts to legalize online gaming and sports wagering, efforts that will keep Connecticut competitive with surrounding states when it comes to gaming entertainment,” said Mohegan Tribal Council Chairman James Gessner Jr. “This is a major accomplishment, reached with overwhelming bipartisan support. The advantages of these changes will be felt statewide, to the benefit of Connecticut residents and our tribal members, at a time when our governments are collectively working to recover from the pandemic and provide vital services. We look forward to continued work with Governor Lamont and the General Assembly, and especially our great Southeastern delegation, to continue moving Connecticut’s economy forward.”

“This is an historic moment in which our nation celebrates with Governor Lamont and the State of Connecticut,” said Mashantucket Pequot Tribal Chairman Rodney Butler. “Gaming is more than a business to our tribe, it is the way we fund our government, pay for our children’s education, care for our elders, and provide healthcare to our members. The agreement not only ushers in a new modern era of gaming, but it solidifies our tribal/state partnership for years to come. We thank Governor Lamont and his staff for their sincere commitment and dedication, and express our deepest appreciation to the many legislative friends who helped bring this across the finish line. Kutaputush (thank you).”