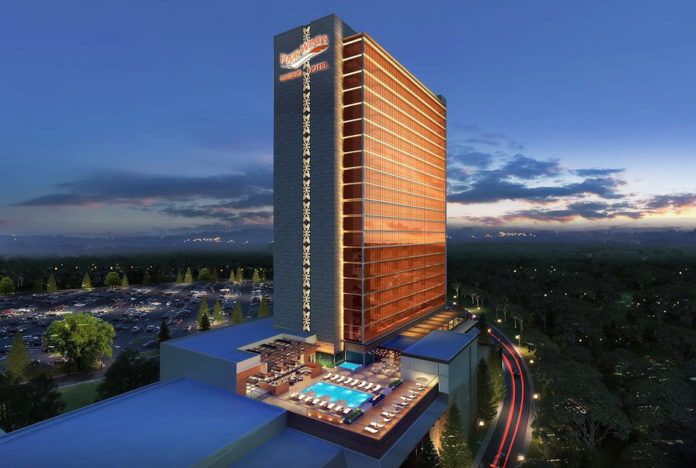 NEW BUFFALO, MI – The Pokagon Band of Potawatomi’s Four Winds Casinos have partnered with U.S. Veterans Service Dogs (USVSD) in the Puppy With A Purpose initiative that allows volunteers to raise a future service dog for a veteran. USVSD is dedicated to helping veterans return to a new normal by training and placing quality service dogs with veterans to mitigate the effects of mental and physical disabilities. During the program, Four Winds Casinos team members will serve as volunteer puppy raisers. Four Winds team members also participated in a fundraiser to help raise funds for USVSD. They were able to vote on names for the puppy, by contributing $1 per vote, with no limitation on their number of votes. The name that received the most votes is Nëmosh (pronounced nuh-mo-sh), which means dog in the Pokagon Potawatomi language. In total, $2,700 was raised.

“Our mission to provide a new normal to veterans through the use of service dogs can only be accomplished through our amazing puppy raisers and we are thrilled that Four Winds Casinos team members have volunteered to be part of this very important process,” said Cody Bellanger, CEO, Director of Training and Client Services for USVSD. “During our dog’s puppy phase, we focus on positive association to new environments, basic obedience, and building foundational behaviors such as how to behave at home. The puppy will accompany their raisers regularly outside their homes. We provide resources to our puppy raisers on training and community of support to help them along the process.”

“We are very proud to support United States Veterans Service Dogs and their important mission to improve the lives of our veterans,” said Frank Freedman, Chief Operating Officer of Four Winds Casinos. “Our team members who have volunteered to be puppy raisers are huge animal lovers, with each having fur-babies of their own. Participation in this program is a testament to the depth of caring and service-oriented spirit our team members are known for.”

Puppy raisers provide loving homes and teach their puppy good foundational behaviors. USVSD puppy raisers play a vital role because they care for the puppies from around eight weeks old until they are recalled to formal training between 14 and 18 months old. Puppy raisers are responsible for providing socialization opportunities to new and diverse environments. They also teach basic obedience such as how to walk on a leash, how to interact with people, sit, down, stay, and public access manners.

After the dog is recalled to formal training, they train with professional service dog trainers for three to six months. Once they complete their training, they will be matched with their ‘forever person.’ The puppy raiser is invited to the graduation ceremony where they will hand over their puppy’s leash and see the impact they made on a veteran’s life.