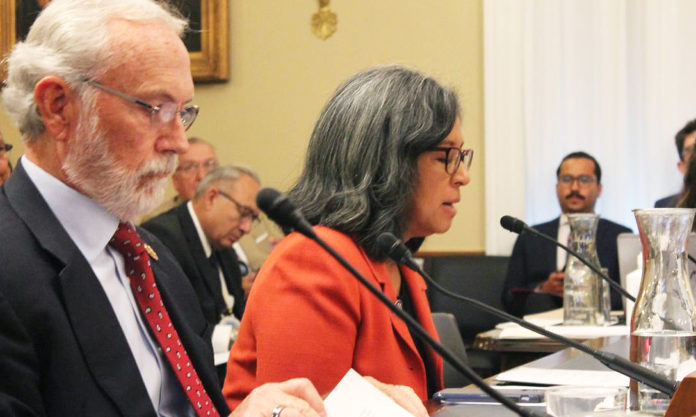 WASHINGTON, D.C.– Congresswoman Marilyn Strickland (WA-10) introduced a bill to expand economic development and protect treaty rights for the Confederated Tribes of the Chehalis. This bill will allow them to lease their lands held in trust for up to 99 years.

“I am proud to stand with the Chehalis Tribe as we work to give them greater access to economic opportunity while strengthening their sovereignty,” said Strickland.

“I whole-heartedly support the Chehalis Tribe’s commitment to spurring economic development in our region,” said Congresswoman Jaime Herrera Beutler. “It’s an honor to help advance this legislation through Congress that gives the tribe long-term certainty with the goal of increased job opportunities for folks in Southwest Washington.”

Congresswoman Strickland’s bill H.R. 6964 was brought up for a legislative hearing at the Subcommittee for Indigenous Peoples of the United States under the House Committee on Natural Resources on September 14th.

Sen. Maria Cantwell (D-WA) introduced companion legislation that would similarly extend land lease rights for the Chehalis Tribe, and spoke out in support of the tribe during the bill’s markup before the Senate Committee on Indian Affairs on May 19, 2022.

“This will open the door to more economic opportunities for the Chehalis Tribe,” said Sen. Cantwell during the Senate Indian Affairs Committee markup in May. “It will allow the Chehalis Tribe to lease their trust lands for up to 99 years, which will help them attract businesses create jobs for tribal members and the surrounding community. The bill will provide the tribe with the necessary level of flexibility to help finance and encourage economic development projects. The Chehalis Tribe – or, I believe, any other tribes – should not be hindered because of the 1955 bill that limits tribal ability to lease their land.”

This bill would amend the Long-Term Leasing Act of 1955, which prohibits tribes from leasing out their land for more than 25 years. Amending this provision would allow the Chehalis Tribe to lease land for up to 99 years, alleviating financial hardship.