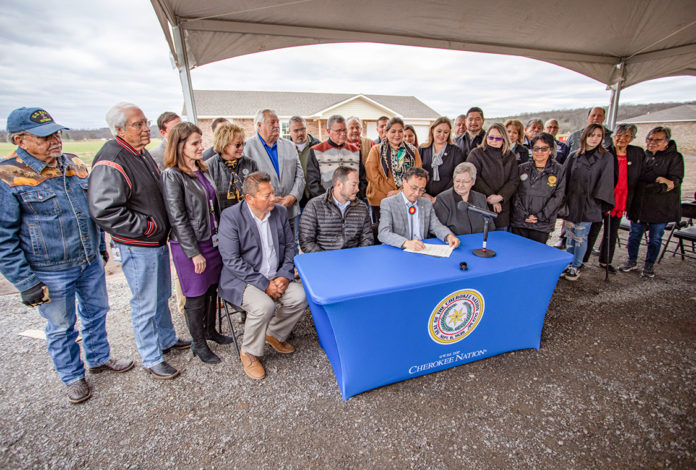 The legislation reauthorizes Chief Hoskin and Deputy Chief Bryan Warner’s landmark Housing, Jobs and Sustainable Communities Act (HJSCA) passed by the Council of the Cherokee Nation and signed into law in 2019. The initial legislation invested $30 million into replacement and repair of nearly 200 homes for Cherokee elders and Cherokee citizens with disabilities and upgraded community buildings with energy conserving projects such as solar panels. The 2019 Act was funded completely with revenue from the tribe’s business arm, while the reauthorization will be funded with a combination of unspent general fund revenue authorized under existing law and additional funds available under the American Rescue Plan Act.

“It gives me great pleasure to sign into law the largest housing investment by the Cherokee Nation for Cherokee citizens in history,” said Chief Hoskin. “Reauthorizing the Housing, Jobs and Sustainable Communities Act will allow us to build on the historic progress already made since 2019. As Cherokee people, we put great value in our Cherokee elders as keepers of our history and culture. They deserve to live in safety and dignity, and the reauthorized Housing, Jobs and Sustainable Communities Act will quadruple our initial efforts to end home insecurity for Cherokees while creating hundreds of quality construction jobs for years to come. This effort will directly impact hundreds of Cherokee families for many years to come, improve communities and make positive generational impacts for everyone.”

As part of the reauthorized HJSCA, Cherokee Nation is dedicating a total of $60 million for constructing new homes, shortening wait times for applicants to the tribe’s New Construction Home Ownership Program. Another $30 million will be dedicated to low-income housing rehab or home replacement and low-income emergency housing rehab, primarily for elders and citizens with disabilities.

“I believe it is a testament to our progress as a tribe that we are wrapping up our initial $30 million housing investment from 2019 – which at the time was our most ambitious housing plan in Cherokee history – and yet it pales in comparison to the reauthorization we signed,” said Deputy Chief Warner. “Our ongoing commitment to building new homes and repairing existing homes across the Cherokee Nation Reservation means we have an opportunity to truly strengthen the finances of Cherokee families and help them establish a foundation of security and prosperity.”

Also included in the funding will be $4 million for new, low-income housing rental units, $4 million for building or expanding fluent Cherokee speakers villages, $10 million for crisis shelters for homeless citizens or victims of domestic violence, $7 million to continue sustainability grants for Cherokee community organizations and buildings, and $5 million for land acquisition and development for housing projects in the proposal.

“When Chief Hoskin and Deputy Chief Warner brought this proposal to the Council, it was clear from the legislation just how much of an impact it will have. I think we are going to make great strides in our housing program and help many of our Cherokee families,” said Council Speaker Mike Shambaugh.

The legislation’s new home construction funding will help shorten wait times for current applicants under the Housing Authority of the Cherokee Nation’s New Home Construction Program. Under that program, participants receive a new home on a rent-to-own basis with a 30-year payoff and a monthly payment below market rate.

“Housing has been a priority for so many of us for years,” said District 8 Councilor Shawn Crittenden. “Chief Hoskin and Deputy Chief Warner have listened and are putting ideas into action to help our people.”

Payments on new homes, under the reauthorized HJSCA, will go directly into funding future housing programs. And under a unique provision of federal law, the new homes can also potentially harness federal impact aid funds for local public schools.

Wilma Fixin, 72, has rented a home for the past decade and is excited to see new legislation that will help her and many other Cherokee citizens with their housing needs.

“I’ve been waiting on a home for six years. I thought it was a great opportunity to apply for new construction,” said Fixin. “It will be good for me to live in town and close to work and if they built a housing subdivision for elders where we share traditions and are able to socialize and do projects together.”

Linda Webster, 74, will soon be moving into a new home as part of the tribe’s housing efforts.

“I have an old house and it’s not energy efficient,” said Webster. “I usually have high electricity and gas bills. For the Chief, Deputy and Council to do all of this for elders is a really, really good thing. There are a lot of us who need replacement homes. I’m so excited for my replacement home, and I drive by it all the time. I’m excited to be in a new, fresh home that is energy efficient and built beside my children.”

The new legislation is on top of the initial $30 million HJSCA funds and over $40 million in recent expansions of various mortgage assistance programs and emergency rehab programs operated by Cherokee Nation and the Housing Authority of the Cherokee Nation. HACN is also planning millions of dollars in additional low-income rental projects using other federal funding sources.

The Council of the Cherokee Nation approved the HJSCA reauthorization during a special meeting before Chief Hoskin officially signed the legislation into law, immediately extending the Act through September 2025.