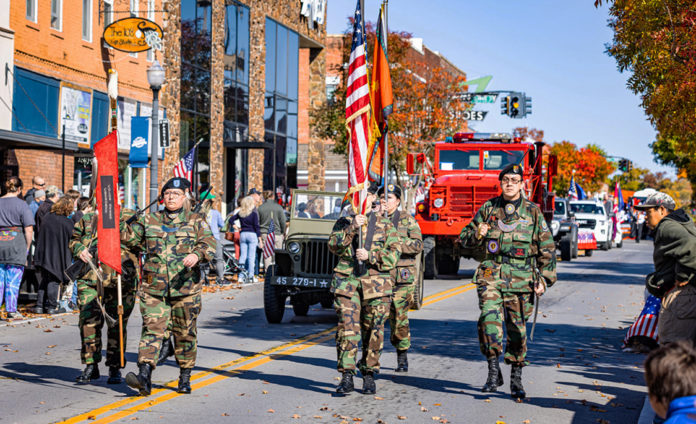 TAHLEQUAH, OK – The Cherokee Nation Veterans Color Guard has reorganized as a non-profit organization to continue honoring veterans and presenting the national colors during tribal events and ceremonies.

The Cherokee Nation Veterans Color Guard has operated on a separate, non-governmental not-for-profit basis at the tribe since 1996. It relies on volunteer military veterans to present colors at official Cherokee Nation events and serve at veteran funerals across the Cherokee Nation Reservation.

In early 2021, Steven Morales, a Cherokee citizen and U.S. Army Staff Sgt., began working with the Cherokee Nation’s Veterans Affairs department, Cherokee Nation Principal Chief Chuck Hoskin Jr. and Deputy Chief Bryan Warner to establish itself as a 501 (c)(19), giving a special tax-exempt status as a veteran’s organization and to operate more efficiently and effectively raise funds to sustain itself. The organization is in the final stages of achieving 501(c)(19) status.

“Before we reorganized, raising and spending funds was difficult,” said Morales, who serves as Commander. “Assistance from Cherokee Nation to gain status as a non-profit tax-exempt corporation will allow us to operate at the level that our board expects, and most importantly, veterans and their families need. Our reorganized Cherokee Nation Veterans Color Guard is focused on sustainability and service.”

“Cherokee Nation reveres all those who served our country and continue serving in the Armed Forces to defend our freedom,” said Chief Hoskin. “Veterans deserve our respect and one way to show this is to support our Color Guard. I’m proud of the Cherokee Nation Veterans Color Guard’s leadership and of our efforts to help them gain solid footing.”

Chief Hoskin and Deputy Chief Warner’s Fiscal Year 2022 budget, approved by the Council of the Cherokee Nation, included $10,000 for the Color Guard.

“There are ways, big and small, to show respect for our veterans each day,” said Deputy Chief Warner. “One way, certainly, is to support the Color Guard. Whether it is thanking these military volunteers for making an event special for a veteran’s ceremony or making financial contribution, we can all find ways to help support them.”