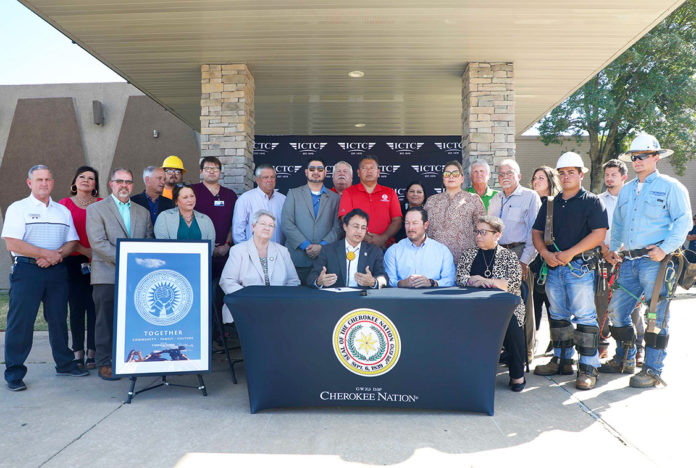 “In 2019, Deputy Chief Warner, the Council and I established a firm policy that career training should be every bit as valued as a college education and we have put over $30 million toward that effort,” said Chief Hoskin. “Three years later we are taking this idea to the next level and constructing our own career readiness campus right here in Tahlequah, where we will continue to work with our partners in the region in career tech centers, but we will have our own career tech campus for some of our unique programs, in turn helping improve citizens’ lives and employability, making our communities stronger and making our Nation stronger.”

“I think the Council understands that college isn’t for everybody and there are different paths to take,” said Council of the Cherokee Nation Speaker Mike Shambaugh. “I can’t even tell you how many lives this will affect by giving our citizens training to go directly into jobs, get apprenticeships and start earning a living and supporting their families. Anything we can do to bring more services to the Cherokee people we should support.”

The career readiness campus will be located at the former Cherokee County fairgrounds southwest of Tahlequah. Cherokee Nation acquired the property – more than 20 acres – after Cherokee County officials announced plans to build a new fairground in a new location. The $10 million investment represents phase one of the campus. A second phase, likely exceeding an additional $10 million, will be needed as the campus expands.

The amended legislation also extends the Career Readiness Act through the end of fiscal year 2025, at which time Chief Hoskin said tribal leadership should review the law. In addition to continuing the funding boost established in the 2019 act and authorizing the career readiness campus, the legislation sets a goal of placing Career Service offices within 30 miles of every Cherokee citizen within the Cherokee Nation’s 7,000 sq. mi. reservation. Cherokee Nation opened its ninth Career Services satellite office earlier this month in Wagoner as part of the ongoing effort.

“The Career Readiness Act has allowed us to offer some training programs that we actually never thought about going into,” said Diane Kelley, Executive Director for Career Services, which oversees the programs. “It has allowed us to get some good paying jobs for trainees who go through them, such as the fiber program which we actually started. The lineman program has also been very successful these last three years, and we couldn’t have done it without the Career Readiness Act being put together. Now we are flourishing as a result.”

“Today, I’m proud to say I’m a licensed paramedic in the State of Oklahoma,” said Cherokee Nation citizen Robert Loudermilk, of Talala in Rogers County, who enrolled in Tulsa Tech’s Emergency Medical Technician program and progressed to the paramedic program with help from the tribe’s Career Readiness Act. “I was hired by the City of Skiatook as a paramedic firefighter in November 2021,” said Loudermilk. “Without the continued assistance and support from Cherokee Nation, I may not have been able to achieve my goals. Now, I will be able to provide a better life for my family and serve the Skiatook community for many years to come.”

Deputy Chief Bryan Warner, who attended the signing ceremony, said the legislation is a way to make positive generational impact on the Cherokee Nation.

“Quite simply, whether it is a college scholarship or the Career Readiness Act, helping the Cherokee people train for lifelong careers not only impacts their lives, it sends a message to young Cherokees that we, as a society, place a high value pursuing rewarding careers,” said Warner.

September 28, 2022
MARKSVILLE, LA – The Tunica-Biloxi Tribe of Louisiana and the City of Marksville signed an agreement transferring ownership of the Marksville Historic...

September 28, 2022
SEATTLE, WA – The King County Council voted unanimously in favor of a landmark settlement with the Suquamish Tribe to redress the...