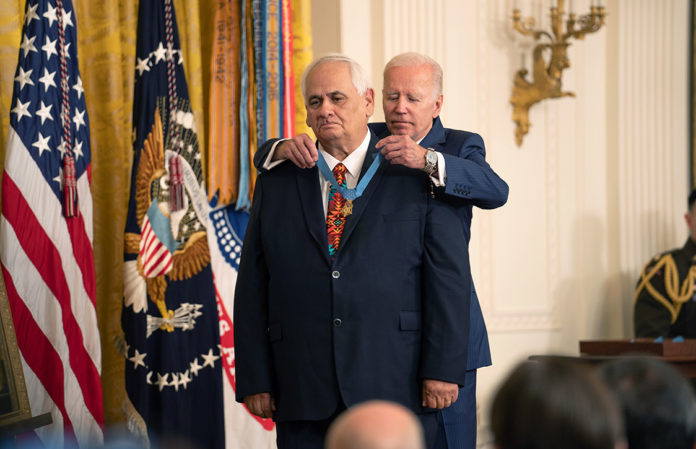 WASHINGTON, D.C. – Cherokee Nation citizen Dwight Birdwell, 74, is the first Native American to receive the Medal of Honor for his heroic service during the Vietnam War after President Joe Biden awarded him the military’s highest recognition at the White House.

“Not every service member has received the full recognition they deserve,” President Biden said during the Medal of Honor ceremony. “Today, we are setting the record straight.”

Although more than 50 years have passed since the jungles of Vietnam, where Birdwell first proved his mettle, Biden said “the tide has not diminished” for his astonishing bravery, selflessness, and putting the lives of others ahead of his own, in which the nation owes its gratitude.

While under heavy enemy fire, Specialist 5 Birdwell’s tank commander was incapacitated and many of the unit’s vehicles were disabled or destroyed. Birdwell moved the tank commander to safety. Himself, wounded, he took command. He continued fighting until receiving enemy fire to his face and torso, and even when he ran out of ammunition, remained on the battlefield until reinforcement arrived. He then aided in evacuating the wounded.

“Mr. Birdwell is someone I deeply respect, not only for his service to our tribal nation, but also for his service to our country,” said Cherokee Nation Principal Chief Chuck Hoskin Jr., who attended the White House Medal of Honor ceremony. “Honoring his heroic deeds and bestowing the Medal of Honor to him is the right thing to do for his valiant actions during the Vietnam War. He is a true Cherokee patriot who put his own life at risk without hesitation and expected no commendation.”

Birdwell joins only 3,800 service men and women since the Civil War awarded the Medal of Honor, including a handful of Cherokees, including Jack C. Montgomery and John Noah Reese in World War II.

Birdwell, a former Cherokee Nation Supreme Court Chief Justice, is a native of the Bell community in Adair County and served on the Cherokee Nation’s highest court from 1987-1999. Today, he continues to practice law in Oklahoma City.

“Mr. Birdwell is a decorated Vietnam veteran who served in the U.S. Army and was later awarded for his extraordinary heroism in multiple battles in 1968,” said Cherokee Nation Secretary of Veteran Affairs S. Joe Crittenden. “He is a longtime servant to the Cherokee people and a highly-respected citizen of the Cherokee Nation, and I am proud to say on a personal level that Dwight is a dear friend. He is deserving of this award and is a true Cherokee warrior.”

In May of 2021, Chief Hoskin wrote a letter of support to U.S. Secretary of Defense Lloyd J. Austin III and Oklahoma’s state and federal leaders advocating for Birdwell to receive the Medal of Honor. In March of 2022, Secretary of Veterans Affairs Crittenden wrote First Lady of the United States Dr. Jill Biden asking for her support in helping Birdwell to receive the honor.

“I’m overwhelmed. Receiving the Medal of Honor is a validation of a long-standing tradition of Cherokee people – men and women – serving not only to protect and defend the United States, but the Cherokee people as well,” said Birdwell. “It gives validation to that tradition. It’s not about me; it also brings honor to those I served with who died in battle. It’s as much for them as it is for me. The big thing is that I’m so proud of being a Cherokee citizen and bringing honor to the Cherokee Nation and the Cherokee people.”

Birdwell is also a recipient of two Silver Stars and a Purple Heart.

The Medal of Honor is awarded to members of the armed forces who distinguish themselves conspicuously by gallantry and intrepidity at the risk of their own lives, clearly distinguishing the recipients above his or her comrades.