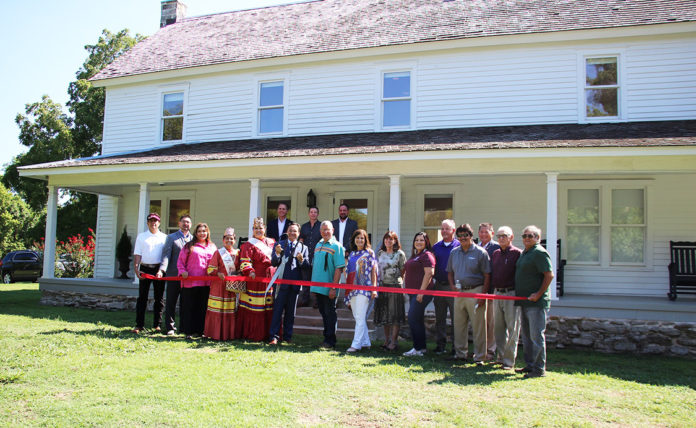 ROSE, OK – Cherokee Nation officials and local community members recently gathered to celebrate the historic Saline Courthouse and its evolution to becoming one of the tribe’s premier cultural destinations.

The Saline Courthouse Museum opened to the public on Aug. 13, 2020, but due to the COVID-19 pandemic, a grand opening ceremony was postponed until now.

“After years of work to properly restore t­­­­his site to its original beauty, we were sadly unable to celebrate its newfound purpose as a cultural destination in August 2020,” said Cherokee Nation Principal Chief Chuck Hoskin Jr. “The Saline Courthouse Museum has regained attention for its dedication to the community and its celebration of Cherokee artists and their work. We hope the public will join us as we take time to acknowledge the achievement in historic preservation here and the impact this site will continue to have on the local community and those visiting Cherokee Nation.”

One of nine built by Cherokee Nation in the late 1800’s, the rural courthouse is the last one remaining. The site was added to the National Register of Historic Places in 1976 just before Cherokee Nation regained ownership in the 1980’s.

The site was preserved for many years through partnerships between Cherokee Nation and the Saline Preservation Association. In 2018, work began to fully restore and modernize the site for use as a cultural museum.

“This site matters; its history matters and so does its future,” said Lisa Melchior, President of the Saline Preservation Association. “When I first came here, the courthouse was listed on Oklahoma’s Most Endangered Places. The efforts to preserve it had started long before me, and so many people have helped carry the torch. There have been many projects throughout the years and a goal in mind for what it could eventually be, but this is far more than I could have ever imagined.”

Mid-construction, the picturesque property served as the backdrop for Chief Hoskin’s announcement of the Cherokee Nation Historic Registry Act in 2019, which offers protection for properties like and including the courthouse with historical significance to the Cherokee Nation.

The Saline Courthouse Museum features two galleries, a video presentation room, a gift shop, public space and public restrooms. One gallery is dedicated to historical and cultural exhibits, while the other showcases different Cherokee artists throughout the year.

“The Saline Courthouse is a community treasure, and it was the perfect place for us to continue to tell our story,” said Travis Owens, Vice President of Cherokee Nation Cultural Tourism. “Having the opportunity to celebrate this site, and the artists featured within it, represents the spirit of togetherness that so many people associate with these grounds. We know that through its new life as a cultural destination it will continue to build its legacy in Cherokee history.”