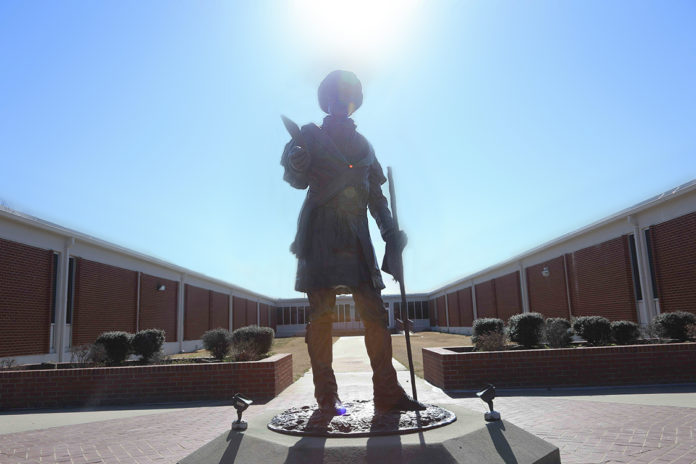 TAHLEQUAH, OK – The Cherokee Nation is celebrating the 150th anniversary and lasting legacy of Sequoyah Schools this week. In 1871, the Cherokee National Council passed a joint resolution signed by former Cherokee Nation Principal Chief Lewis Downing establishing a school for orphaned Cherokee and Native children. The school officially opened its doors on Mar. 4, 1872. It transformed into a training school and then high school where currently it serves Cherokees and 42 other tribes in grades 9-12. The school is operated by the Cherokee Nation and partly funded by the Bureau of Indian Education.

“There aren’t too many Cherokees whose family or friends have not been connected to Sequoyah, as it has played an integral role in educating and molding the lives of more than 4,000 esteemed graduates over the decades,” said Cherokee Nation Principal Chief Chuck Hoskin Jr. “Today, we join together to celebrate its historical place in our tribe and look ahead to securing its future. Deputy Chief Bryan Warner and I are on its anniversary announcing that $20 million has been dedicated to infrastructure for new, modern school facilities so we can ensure its legacy of its excellence continues on.”

A rendering and more information on construction of the new high school is forthcoming. To celebrate, students and teachers will bury a time capsule with letters and mementos to open in 50 years, on Mar. 4, 2072. The “It Takes a Nation: Sequoyah Schools and the Roots of Excellence” exhibit is also scheduled to open on Mar. 15 at the John Ross Museum in Tahlequah. It looks at the school’s history and beginnings as the Cherokee Orphanage starting with 54 students. Sequoyah was purchased by the federal government and run as a Bureau of Indian Affairs Indian boarding school for decades until Cherokee Nation regained operation of the school in 1984.

Other activities at the anniversary celebration included alumni interviews, a photo slideshow from over the years and more on Cherokee Nation’s Facebook and Twitter pages.

“As a Sequoyah parent and former student, I am so proud our school is dedicated to both academics and our rich cultural heritage,” said Candessa Tehee, Cherokee Nation Tribal Councilor.  “Sequoyah High School provides a top-notch education while also promoting Native excellence and serving as a place where Cherokee language, history, and culture are placed as equals to the expected curriculum.

With a focus on academic excellence and Cherokee language studies, Sequoyah Schools frequently counts among its senior graduates Gates Millennium Scholars and students accepted into prestigious colleges and universities across the U.S.

“I want to thank our alumni, students, faculty and staff, and other community stakeholders both past and present for their contributions, their perseverance, and especially their hard work which has made Sequoyah Schools everything it is today,” said Cory Bunch, Interim Superintendent of Sequoyah and Cherokee Nation Chief of Staff.

The Cherokee Nation has a longstanding history of educating the Cherokee people going back to pre-Removal.

“It is no surprise that we now celebrate Sequoyah Schools as the ‘school of choice’ for Cherokee and Native students,” said Deputy Chief Warner. “Sequoyah alumni have excelled in academics, in the arts, and in sports, and over the years have accomplished amazing feats. Today, many former Sequoyah Schools students are leaders within their tribes and their communities. On this 150th anniversary of Sequoyah Schools, let’s honor those who paved the way for today’s students, faculty and staff and pause and honor those who came before us and now walked on.”

Sequoyah Schools has grown into a modern institution covering more than 90 acres and includes a dozen buildings on campus, next to the Cherokee Nation tribal government offices in Tahlequah.