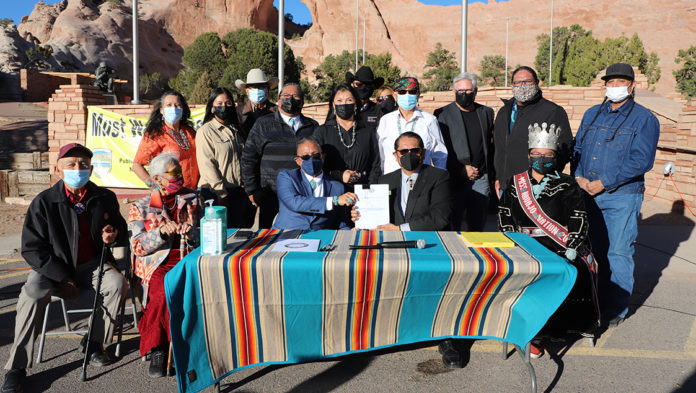 WINDOW ROCK, AZ – Navajo Nation President Jonathan Nez and Vice President Myron Lizer were recently joined by members of the 24th Navajo Nation Council and the Air is Life Coalition, as they signed into the law the “Niłch’ Éí Bee Ííná – Air is Life Act of 2021” through Resolution CO-58- 21, which prohibits using commercial tobacco products in enclosed and indoor areas on the Navajo Nation.

“We commend the diligent work of the Air is Life Coalition for paving the way for us to be here today,” said Chairman Daniel Tso of the Heath, Education, and Human Services Committee (HEHSC). “The perseverance of Dr. Patricia Nez-Henderson and her team deserves recognition. It is an honor to have been asked to sponsor this historic legislation. The Navajo Nation Council has spoken loudly that the health of the Navajo people is valuable and not to be gambled with.”

The Air is Life Coalition has been working collaboratively for over 13 years to educate the public on the dangers and risks of secondhand smoke and assisted the Navajo Nation to establish this comprehensive smoke-free bill.

“The Air is Life Act is a monumental achievement and bold step in the right direction to promote healthy living among our Navajo people,” said President Jonathan Nez. “Secondhand smoke can cause health issues among nonsmokers, such as children and elders. Public health professionals have concluded that the only way to protect nonsmokers and vulnerable populations from secondhand smoke is to require smoke-free workplaces and public places. It is a fundamental right to protect our Navajo people’s right to breathe clean air.”

Chairman Tso is the bill sponsor, with Speaker Seth Damon, Delegate Carl Slater, and Delegate Nathaniel Brown attached as cosponsors. In October, the Act was unanimously passed by 20 votes in favor.

“The health of our people is important to our future as the largest Sovereign Nation in the country,” said Speaker Seth Damon. “Our health studies show through the data that you live a shorter life with every cigarette you light or secondhand smoke you inhale. This resolution ensures we end it in our public places and tribal office buildings for the safety of all.”

The signed resolution enacts the Air is Life Act in Title 13 of the Navajo Nation Code. The Navajo Department of Health and the Navajo Nation Division of Public Safety will enforce the provisions and issue violations for any penalties.

“Continued efforts to promote the implementation of comprehensive smoke-free laws are critical to protect nonsmokers from preventable health problems in workplaces, public places, and events,” said Vice President Myron Lizer. “The health effects from commercial products include stroke, lung cancer, heart disease, asthma, and others. Smoke-free laws have been shown to improve indoor air quality, reduce secondhand smoke exposure, change social norms regarding the acceptability of smoking, prevent youth and young adult smoking addiction, and reduce heart attack and asthma hospitalizations among nonsmokers. As leaders, we have to ensure the well-being and health of our Navajo citizens.”