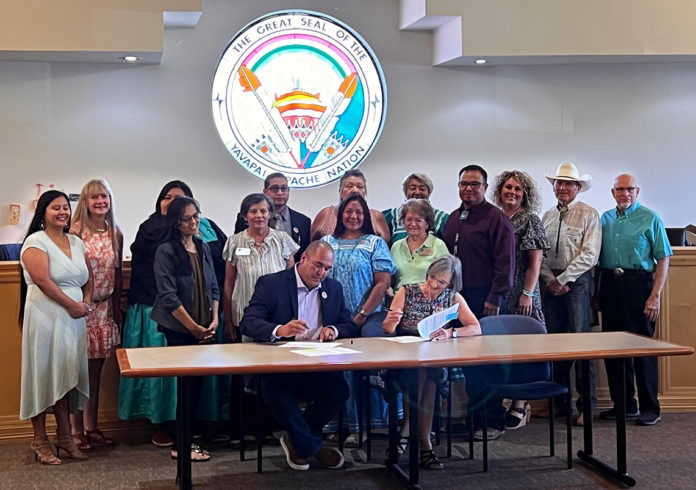 CAMP VERDE, AZ – The Yavapai-Apache Nation and the town of Camp Verde have entered into an intergovernmental agreement regarding future management and development of land the Nation is working to obtain as part of a land exchange with the U.S. Forest Service.

Under the land exchange, the Nation will transfer certain non-reservation lands it owns to the U.S. Forest Service in exchange for ancestral lands adjacent to the Nation’s Middle Verde Reservation. These lands are a small part of the much larger reservation established for the Nation by President Grant in 1871. That reservation was lost in 1875 when the U.S. forcibly removed the Yavapai and Apache from their Verde Valley home to imprisonment at San Carlos. The intergovernmental agreement formalizes a process for continued cooperation between Camp Verde and the Nation on future development projects within the exchange lands, providing that existing roads, utility, and other easements will be maintained on any lands added to the Nation’s reservation.

The agreement also cements the Nation’s support for the town’s potential acquisition of up to 40 acres of land along General Crook Road to develop new public safety facilities to improve emergency response times. Camp Verde is home to 11,000 residents who will benefit from this new infrastructure.

Additionally, the town will benefit from collecting retail sales tax revenues from future private, non-tribal developments on the Nation’s new lands. The tax measures will also see the Nation contributing one percent of its sales tax revenues to the town of Camp Verde, on sales generated within the 1,200-acre portion of the new lands designated as the Yavapai-Apache – Camp Verde Economic Development Corridor.

The Yavapai-Apache Nation is a significant employer in the town of Camp Verde, boasting best-in-class establishments – namely Cliff Castle Casino and Hotel, which draws visitors from near and far, year-round, for traditional Indian gaming, world-renowned entertainment, and general tourism. The Nation’s historical drive for economic prosperity indicates that the return of the Forest Service lands to the Nation is not only a positive moral decision, but also a wise foundation for future economic development.

“This is a humbling, historic event for our communities to work together for a better tomorrow for generations to come,” said Vice-Chairwoman Tanya Lewis.

This sentiment was shared across the board, with members throughout the Yavapai-Apache Nation expressing their appreciation for the agreement.

“The moment is historical for the Town of Camp Verde and The Yavapai-Apache Nation to come together, move from the past and look into the future together,” said Councilman Ricardo Pacheco.

“The Yavapai-Apache Nation leadership has always known that land was crucial for the Nation to develop, grow, prosper, and provide for its people; the path was set long ago, and it was through the determination of the Nation’s leaders that today’s agreement with the town was made possible,” said Scott Canty, the Nation’s Attorney General.