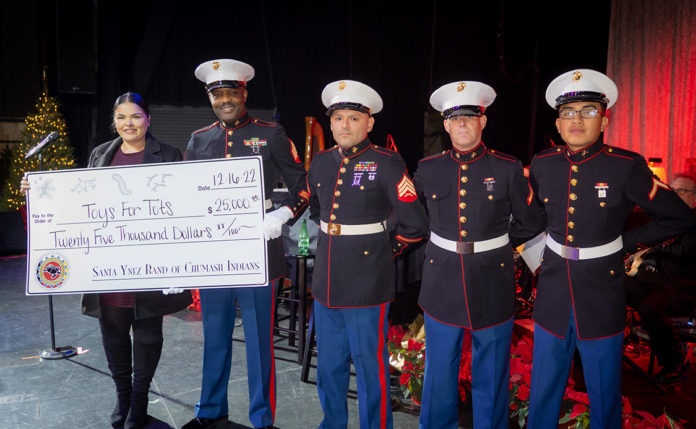 SANTA YNEZ, CA – The Santa Ynez Band of Chumash Indians contributed $25,000 to this year’s local Toys for Tots campaign to help the non-profit’s efforts to supply toys to economically disadvantaged children this holiday season. The check presentation occurred on stage prior to Grammy Award-winner Johnny Mathis’ performance at the Chumash Casino Resort.

“The Toys for Tots campaign makes an enormous impact on children’s lives during the holiday season,” said Kenneth Kahn, Tribal Chairman for the Santa Ynez Band of Chumash Indians. “We are proud of our long-standing partnership with a non-profit that brings so much joy to children in our community.”

This is the 19th consecutive year the tribe has donated $25,000 to the local Toys for Tots campaign. This year’s donation brings the tribe’s total contributions to the campaign over the years to $475,000.

“We are so grateful for our 19-year partnership with the Santa Ynez Band of Chumash Indians,” said Soledad Kennedy, the Marine Corps League 1340 Toys for Tots Coordinator for Santa Barbara County. “Their dedication for nearly two decades has ensured that thousands of families have presents under the tree.”