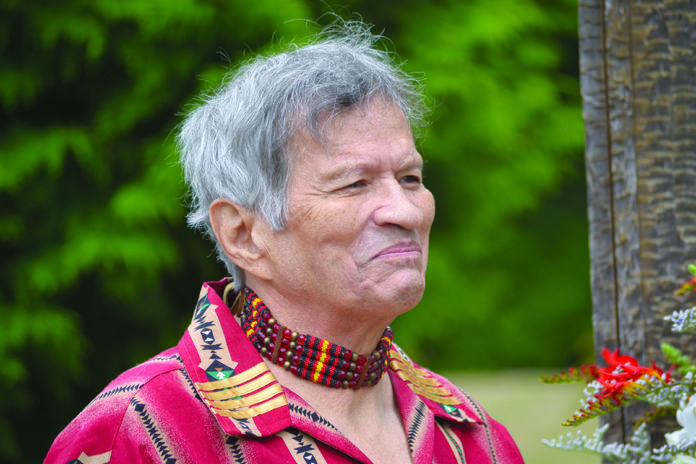 Belmont served three terms as Chairman of the Suquamish Tribal Council in the 1970s, and is celebrated for his work laying the groundwork for the tribe’s current resurgence. Under his leadership, the tribe created its first museum, built its first Tribal Center, and launched its first fish hatchery.

Forsman pointed to attempts to undermine the tribe’s criminal jurisdiction over non-natives on the Port Madison Reservation, confrontations with Kitsap County about land use planning in Suquamish, and important early efforts to protect treaty rights to harvest salmon and shellfish. Belmont was in the middle of it all, on several occasions traveling to Washington, D.C., to press the Supreme Court for better protections of tribal lands and rights.

“He was a gifted orator, and was known for his inspiring speeches,” said Forsman. Belmont was born at Neah Bay, WA on July 24, 1939, the son of Richard and Lily Belmont. He was the fourth of five children and the only son. His four sisters are Ivy Cheyney, Maureen Sather, Dicky Johnson, and Sharon Ogilvie.

When Richard was about five years old, his family moved to Bremerton, WA where he grew up and went to school, eventually earning a two-year college degree. After a tour of duty in the Coast Guard, serving aboard a 350-ft, big gunned cutter based in California, Belmont returned to Bremerton where he soon began work as radiographer X-raying repair patches on nuclear submarines at the shipyard.

“Belmont did the work of Chairman while holding a full-time job at Puget Sound Naval Shipyard and raising a family,” Forsman noted. “Richard and those who served with him on Tribal Council provided their time and leadership as volunteers, motivated by a sense of justice and love for their people.”

Retiring after 26 years of service at the shipyard, his hard work was far from over, especially his service to his tribe. And while he worked hard, he also played hard. He loved pickleball and softball. Well into his sixties, he was still winning awards as a competitive sportsman. His true passion, though, was fishing. Even in his seventies, you could find him casting for trout on Kitsap County’s many lakes and hand-throwing his salmon nets on Sinclair Inlet.

Known as a hardworking, kind, and generous person, Richard would stop to help neighbors and strangers alike. He had an infectious laugh and a keen sense of humor. At Saturday’s Memorial Service, Tribal Council Member Sammy Mabe read this story from Belmont’s Eulogy:

In the early 1940s, Richard Belmont Jr. was a little boy growing up on the shores of Neah Bay, where the Strait of Juan de Fuca meets the Pacific Ocean in the rugged and remote northwestern most tip of Washington State.

Later in life, he would tell the story of the mustang stallion known as Midnight Star, with the white flash on its black forehead, who led a herd of wild horses that roamed the nearby prairies.

The big stallion would come roaring through Belmont’s village from time to time with a trail of mustangs following behind.

“One day I was outside next to a little fence we had, and all of a sudden Midnight Star came running through,” Belmont once told a group who’d gathered to hear his stories. “Mom was just terrified, she didn’t know what to do. And all those horses went over the fence and right over the top of me. And just kept on going on down into the prairie.”

Maybe it was that day that Belmont first caught a glimpse of what it meant to lead. Maybe it was that moment that lit some fire that would inspire him to take on obstacles big and small as he led his own people to better places.

Whatever it was that fueled him – his family, his friends, and no doubt his tribe, all kindled and contributed to that fire as well – he will be remembered for years to come as a man who was equal parts fierce advocate, gregarious friend and fisherman, and trailblazing Tribal Chairman.

In lieu of flowers, the family asked for donations to The Suquamish Tribal Museum and the Alzheimer’s Foundation.

“Richard had a big personality and was liked by many. His presence will be greatly missed. His suffering now ended, he is with the Creator, his ancestors, and his beloved dog Lord Ish of Belmont,” said the family in a statement.