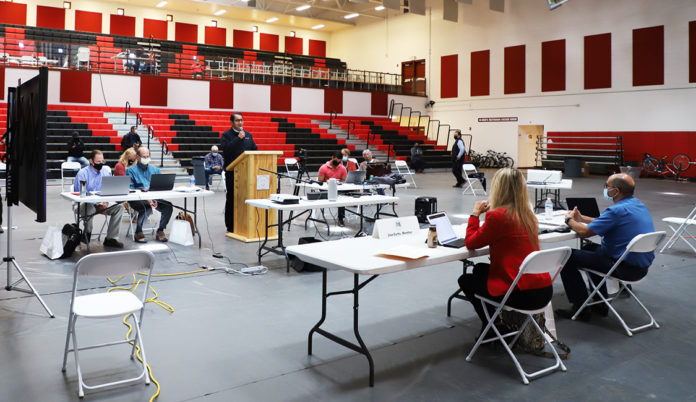 The Citizen Redistricting Committee is an independent, non-partisan body tasked to develop and propose district maps for New Mexico’s congressional delegation, Senate, House of Representatives, and the Public Education Commission every 10 years after the census. The committee is tasked with collecting public comments about the redistricting maps and proposing plans to the state legislature by Oct. 30.

“We appreciate the Citizen Redistricting Committee for hosting a public meeting on the Navajo Nation and allowing Navajo citizens to express their input and recommendations,” said President Nez. “New Mexico tribal nations play a significant role in national, state, and local elections. Together, our voices and votes are recognized on interests that impact our communities, such as health, the economy, and education. Therefore, when it comes time to put forth plans for redistricting, we call on the committee to comply with all applicable federal laws, including the Voting Rights Act of 1965 and be consistent with the traditional districting principles. Redistricting efforts should attempt to preserve communities of interest, including political subdivisions of tribes.”

He also noted that the Native American right to vote in New Mexico was not granted until 1948, long after the passage of the Indian Citizenship Act. To date, Native people still face significant challenges when it comes to voting, including traveling long distances and language barriers on Election Day.

“Despite all of these challenges, in 2020 the power of the Native vote was put on full display,” added President Nez. “As the largest tribe in the country, with over 400,000 enrolled citizens, the Navajo Nation has a strong interest in ensuring that its citizens have an equal opportunity to participate in elections. Our voices must be heard.”

A portion of the presentation also highlighted challenges and barriers during the 2020 Census that likely led to an undercount of members of the Navajo Nation.

“The 2020 Census also highlighted many challenges the Nation endures, such as rural addressing, broadband accessibility, and residence criteria for multi-generational homes,” continued President Nez. “The process started out on the right path and we were excited once again to participate in this democratic process, but as you all know just when our country was ready to do its census operation, the COVID-19 pandemic altered and halted our census operation. Doing the census count on Native land or rural America is different than doing the census in other parts of America where mailing and physical addresses and internet accessibility do not hinder these efforts. Overall, the Navajo Nation requests a fair redistricting process that will give Navajo citizens an equal opportunity to elect leaders and interests of their choice.”

In the State of New Mexico, approximately 12 percent of the total state population is comprised of Native American people. The Navajo Nation has 48 chapter governments in New Mexico within McKinley, San Juan, Cibola, Rio Arriba, Sandoval, Bernalillo, and Socorro Counties.