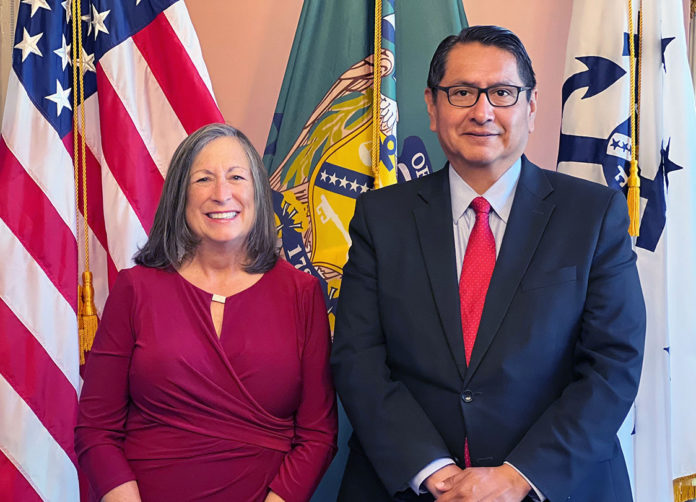 WASHINGTON, D.C. – Navajo Nation President Jonathan Nez and Navajo Nation Washington Office Executive Director Lashawna Tso met with Marilynn Malerba, who was appointed by U.S. President Joe Biden in June to serve as the first Native American Treasurer of the United States. Her signature will appear on U.S. currency later this year. Malerba wore her traditional regalia as she was sworn-in at the Treasury Department in Washington D.C. on Monday.

Prior to her recent appointment, Malerba became the 18th Chief of the Mohegan Tribe in 2010 and is the first female Chief in the tribe’s modern history. She previously served as Chairwoman of the Tribal Council, and served as Executive Director of Health and Human Services for her tribe.

“On behalf of the Navajo people, I congratulate Treasurer Malerba on her new role and look forward to building a strong partnership with her to move our Nation forward and create new opportunities for our people,” said President Nez. “Her historic appointment is a big step forward for all Indigenous people across the country. We pray for her continued success as she takes on the challenge of strengthening the relationship between the federal government and tribal nations. We look forward to seeing her name on U.S. currency across the country.”

Treasurer Malerba oversees the newly established Office of Tribal and Native Affairs under the U.S. Treasury, which houses staff who are dedicated to communication with tribal nations and the hub for tribal policy. In addition to leading the Office of Tribal and Native Affairs, the Treasurer directly oversees the U.S. Mint, the Bureau of Engraving and Printing, Fort Knox, and is a key liaison with the Federal Reserve. Treasurer Malerba will also serve as a senior advisor to the Secretary of the Treasury in the areas of community development and public engagement.

During their discussion, President Nez spoke about financing options that would allow the Navajo Nation to construct new public safety facilities in the communities of Shiprock, NM and Window Rock, AZ, which are in need of new buildings due to safety concerns with the current ones. He also addressed the Navajo Nation’s progress in expending federal funds through the CARES Act, American Rescue Plan Act, and other forthcoming funds through the Bipartisan Infrastructure Law and the Inflation Reduction Act.

The Navajo Nation Division of Economic Development announced this week the near completion of the Navajo Nation’s Small Business Credit Initiative (NNSBCI) application. The U.S. Treasury allocated federal funds available through the State Small Business Credit Initiative under ARPA. The Nation has been developing a Navajo program to expand access to capital and financing for our Navajo-owned small businesses. The program will establish greater economic sustainability by offering essential resources to Navajo-owned small businesses by creating new jobs and increasing economic opportunities.