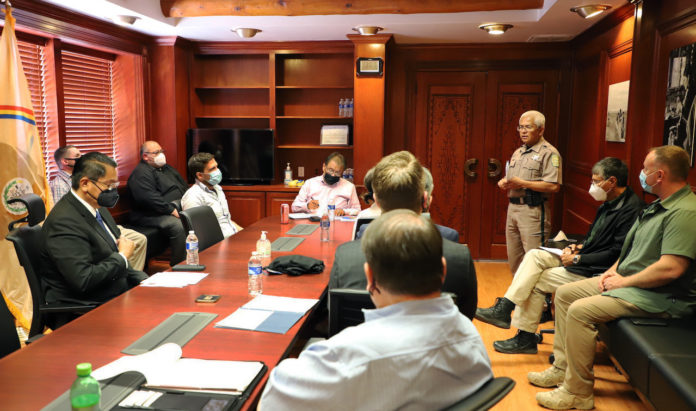 WINDOW ROCK, AZ – Navajo Nation President Jonathan Nez welcomed U.S. Marshal for the District of Arizona, David Gonzales, and officials with the U.S. Department of Justice and White House OMB to the Navajo Nation to discuss federal funding and coordination related to major violent crimes and the steps that the Navajo Nation Division of Public Safety is taking to address those issues. The meeting was held at the Office of the President and Vice President in Window Rock, AZ.

Marshal Gonzales has served the District of Arizona since 2002, working with various law enforcement and criminal justice jurisdictions to enforce federal court initiatives including apprehending fugitives, housing and transporting federal prisoners, and managing and selling seized assets acquired by criminals through illegal activities.

During the meeting, federal officials stated that violent crimes are increasing across the country and that officials with the Biden-Harris administration requested that the U.S. Marshals Service meet with President Nez to learn more about the public safety challenges on the Navajo Nation.

Within the last year, the Navajo Nation Division of Public Safety also created the Proactive Criminal Enforcement Program (PACE) comprised of K-9 units, the Drug Enforcement Unit, and commissioned police personnel that conduct field operations to uncover and stop or disrupt crimes related to drug use/sales, bootlegging activities, and violent crimes. In addition to federal funding, President Nez authorized the allocation of an additional $500,000 to the Navajo Police Department to support the drug enforcement efforts and other public safety operations, which have led to multiple seizures of large quantities of drugs, alcohol, and illegal firearms and the arrests of violent offenders.

“Since my time as Vice President of the Navajo Nation to now, as President, there has been an increase in the number of requests for extraditions for violent crimes committed on our Nation,” said President Nez. “I’ve signed off on those extraditions to hold offenders accountable for their alleged crimes. I meet with our Division of Public Safety and Navajo Police Department frequently to receive reports and to provide support, but we still use a great amount of funding and resources for daily operations such as transporting offenders to faraway detention facilities due to the closure of public safety facilities in Shiprock and Window Rock.”

In recent meetings with White House officials and congressional members, President Nez has advocated for federal funding to construct new public safety facilities in Shiprock, NM, and Window Rock, AZ, to allow the Navajo Nation to direct more funding to fighting crime instead of transporting offenders.

Director Henderson recommended to the federal OMB officials that the Navajo Nation receive more annual funding, as opposed to grant funding that is often less reliable from year to year. He also stated that a large majority of time and resources are spent transporting alleged perpetrators to and from court hearings held in other jurisdictions for violent crimes committed on the Navajo Nation. Since the start of the COVID-19 pandemic, Henderson also said that more time and manpower have been dedicated to addressing deaths related to COVID-19.