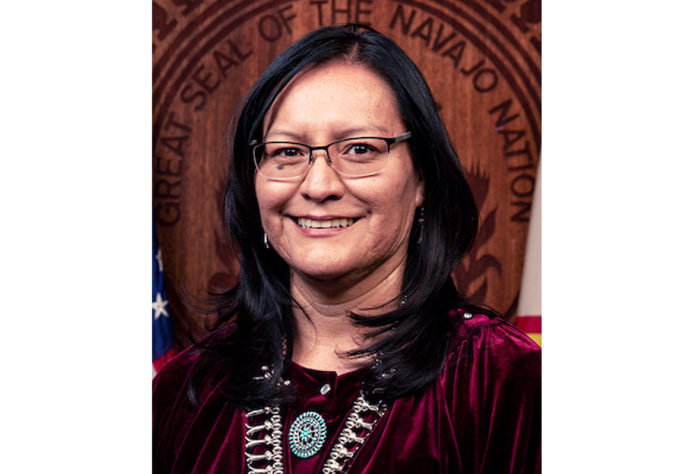 WINDOW ROCK, AZ – President Joe Biden has appointed Navajo Nation First Lady Phefelia Nez to serve as a member of the Board of Trustees for the John F. Kennedy Center of Performing Arts in recognition of her advocacy for tribal communities.

The Board of Trustees of the John F. Kennedy Center of Performing Arts is comprised of government officials and individuals appointed directly by the President of the United States, who provide guidance and direction to assist the Kennedy Center in fulfilling its mission and vision. The Kennedy Center hosts more than 2,000 performances each year of diverse arts and is the home of the National Symphony Orchestra and the Washington Nation Opera.

“On behalf of the Navajo people, I congratulate my wife, First Lady Nez, on her historic appointment to the Kennedy Center Board of Trustees,” said Navajo Nation President Jonathan Nez. “We thank the Biden-Harris administration for recognizing the work of the First Lady and, most importantly, for having a seat at the table for tribal nations in the performing arts. With the First Lady’s experience and passion for Navajo arts, education, and language, we are optimistic that she will work with other board members to benefit and highlight our tribal people and communities. Congratulations to her on this milestone achievement.”

As a Board of Trustee, First Lady Nez will help achieve the Kennedy’s Center mission to serve as a suitable memorial in honor of the later U.S. President John F. Kennedy, ensure the Kennedy Center presents world-class performing acts from across the globe, maintain the center’s role as a leader in national performing arts education policy and programs, and ensure accessibility that performing arts are accessible to all Americans, including tribal citizens.

“I am humbled to join the mission of the Board of Trustees of the Kennedy Center,” said First Lady Nez. “The arts, education, and museums are essential to the well-being and health of all communities. The arts reflect our livelihoods, creativity, innovation, and self-identity as the First People of this country. It is a critical time in history in which the arts and education are essential to building vibrant and thriving communities. I look forward to uplifting this work at the national level so that all citizens across the country can benefit from increased diversity, equity, and accessibility.”