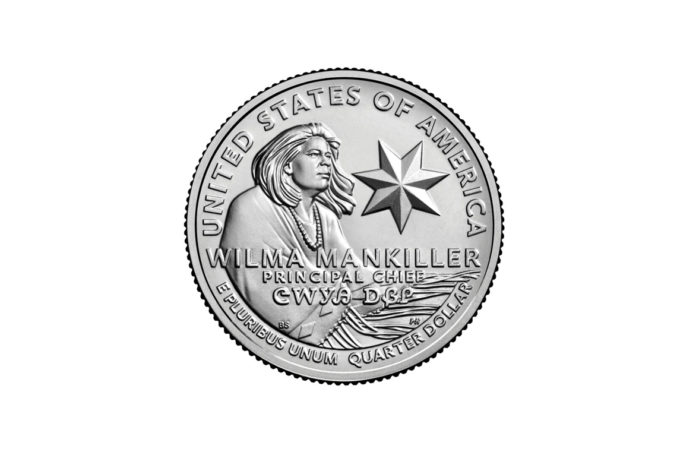 WINDOW ROCK, AZ – The 24th Navajo Nation Council has commended the U.S. Mint and the American Women Quarters Program for selecting the coin design to include former Cherokee Nation Principal Chief Wilma Mankiller on the U.S. quarter, which will be in full coin circulation this year.

According to the U.S. Mint, this will be the third coin from the American Women Quarters Program that is a four-year showcase that celebrates the accomplishments and contributions made by women to the development and history of the United States.

“Chief Wilma Mankiller was the first woman elected Principal Chief of the Cherokee Nation,” said Madam Chair Eugenia Charles Newton. “She spent most of her life advocating for Native American women’s rights and tribal issues that were ignored by the federal government. Her leadership created the Cherokee Community Development Department that led to the establishment of clean water systems, and the rehabilitation of tribal houses for hundreds of families. The Navajo Nation and our Diné women recognize her forward thinking and candid leadership that held the federal government accountable. Chief Wilma Mankiller’s image will forever be etched into history as a woman who transformed leadership, who inspired Native women and young girls that made it possible to dream big.”

Born 1945 on the Cherokee Nation, a drought devastated her community, relocating her family to a California housing project in 1950. Through most of her younger years, Chief Mankiller experienced culture shock, poverty, and racism in an urban setting.

“The Navajo Nation celebrates the life and legacy of the late Chief Wilma Mankiller,” said Council Delegate Amber Kanazbah Crotty. “Like our beloved grandma, Dr. Annie Dodge Wauneka, Chief Mankiller received the Presidential Medal of Freedom for building health care centers and establishing children’s programs. Our Indigenous women have been at the forefront leading communities, raising families, and carrying the oral tradition since time immemorial. We are forever grateful for their strength and courage to pave the way for current and future Asdzání béésh bąąh dah si’ání.”

Beginning this month, the U.S. Mint will issue up to five new reverse designs each year. The Chief Wilma Mankiller third quarter will feature her wrapped in a traditional shawl with the seven-pointed star of the Cherokee Nation to the right and “Cherokee Nation” written in the Cherokee syllabary below her name. Mint sculptor Phebe Hemphill is the coin designer, who also sculpted several Code Talker and Native American coins this decade.

“Chief Wilma Mankiller was awarded the Presidential Medal of Freedom by President Bill Clinton, which is the nation’s highest civilian honor,” said Council Delegate Charlaine Tso. “She is a longtime champion for the rights of Indigenous women and served decades as the leader of the Cherokee Nation. She is an advocate for tribal self-determination and a national best-selling author who told the true story of her community. Our Navajo women honor her hard work uplifting the voices of our young Indigenous girls around the country. May this quarter honor her memory for years to come.”

The American Women Quarters Program has chosen the following distinguished women to be celebrated in 2022: