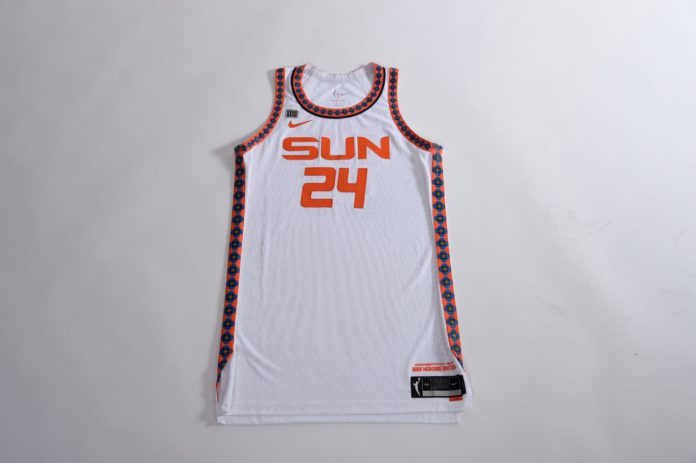 “We were very pleased with the entire uniform design process,” said Kathy Regan-Pyne, Recording Secretary of the Mohegan Tribal Council. “Nike demonstrated their commitment to getting it right. They consulted and worked with us as a team. Members of the Tribal Council and Council of Elders, our Chief and our Medicine Woman were all involved in some fashion. It was a collaborative effort, and we all absolutely love the end result.”

Each Connecticut Sun Nike uniform incorporates tradition, symbolism and the ideology of being one with nature – all important components of the Mohegan Tribal culture. Also featured on the jersey is the new logo of the Connecticut Sun. The Sun recently revealed an updated version of its secondary logo, which now serves as the primary look for the Sun. The logo was derived from an old Mohegan symbol.

This uniform design was inspired by power, courage, sophistication as well as the Mohegan Tribe’s symbol of the rising sun. The trim represents the old Mohegan symbol first painted on bark and traditional baskets. The center dot on the symbol represents the spiritual life force. The 13 dots around the life force represents the Mohegan creation story – the 13 sections on Grandfather Turtle’s back where earth was created. The Sun’s secondary logo is displayed on the belt buckle for the first time.

This uniform design was inspired by the transition from sun to moon — by groundbreakers, storytellers and exploration without boundaries. The 13 dots in the Mohegan symbol on the trim signify the 13 moons of the lunar year which represent the passage of time. It also shows the Mohegan people are 13 generations removed from their first chief, Uncas.

This uniform is representative and inspired by Gladys Tantaquidgeon, Mohegan’s Medicine Woman, who lived to 106 years old. Not only was she the tribe’s medicine woman, she was an anthropologist, author, tribal council member and an Elder within the Mohegan Tribe. Gladys was an inspiration to women around the State of Connecticut as well as throughout Indian Country. This uniform is influenced by a woman who fought for social justice, who stood tall for other women and advocated for all women.

The WNBA/Connecticut Sun Nike Rebel Edition is royal blue, which represents Gladys’ blue regalia. The neckline represents the canoes the tribe used to travel along the Massapequataug River. The trim showcases the ups and downs of life, as life is not linear. It also represents the rolling hills of the tribe’s homeland. The dots on the trim of the shorts represent the people and those met along the life trail. The front of the jersey says Keesusk – Sun in the Mohegan language.

“Gladys Tantaquidgeon embodied the spirit of the Mohegan people unlike anyone else,” said Beth Regan “Morning Deer,” Vice Chairwoman of the Mohegan Tribal Council of Elders. “She was dedicated to serving and elevating her people. Along with her father and brother, she founded the Tantaquidgeon Museum, the oldest Indian owned and operated museum in the country. She was a teacher, Medicine Woman, Tribal Councilor and Nonner (Elder woman of respect).”

Regan continued, “An advocate for social justice, Gladys fought for her Mohegan people by supporting traditional Mohegan religion, preserving our homelands and mother earth, saving traditional ceremonies and passing on our stories. She promoted social justice for all people of color, fighting for Civil Rights in addition to advocating for and working with imprisoned women, offering hope and courage to those with little. She is an inspiration to me to always walk the life trails with Mohegan good medicine in my heart and spirit.”

Both WNBA/Connecticut Sun Nike Explorer and Rebel Editions are now available for purchase.

May 11, 2021
NORFOLK, VA – HeadWaters Resort & Casino, owned and operated by the Pamunkey Indian Tribal Gaming Authority, has announced a partnership with the...

May 11, 2021
LONDON, U.K. – European Casino Association (ECA) Chairman Per Jaldung has released a statement saying ICE London 2022 will be a pivotal...

May 10, 2021
LONDON, U.K. – International Game Technology (IGT) has announced that its high-performing, previously lease-only, PeakSlant49 cabinet is now available for purchase throughout...