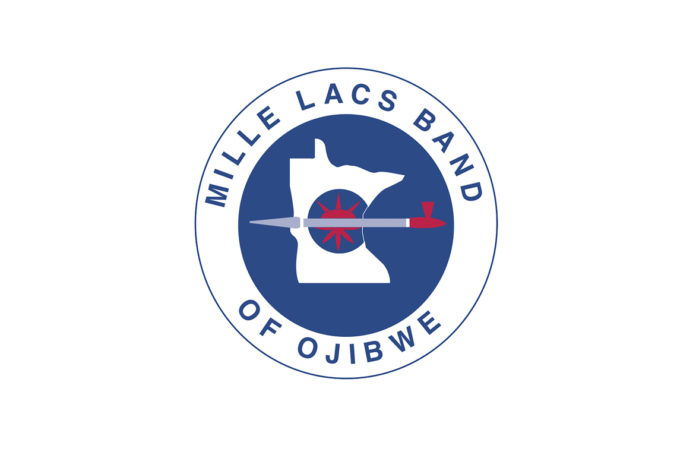 ONAMIA, MN – In her 2022 State of the Band address, Mille Lacs Band Chief Executive Melanie Benjamin reflected on 2021 as a year of great progress for the Mille Lacs Band and for Native Americans at the federal and state level, but also a year of great loss as many Band elders passed away due to complications from COVID-19 and other health issues.

One significant example of progress for Native people with the state and federal government has been the advancement of tribal consultation. In 2021, the Mille Lacs Band was involved in hundreds of consultation sessions with federal and state government agencies. In the first year of the Biden Administration, the Band has had more federal consultations than with all previous presidential administrations combined.

Benjamin also noted the significant impact of American Indians being appointed as cabinet secretaries and other key leadership positions in federal agencies. “American Indian people are now seated at the tables of power throughout Washington D.C.,” said Benjamin. “These are people who understand tribal sovereignty, who know the challenges we face, and who do not need a history lesson because they are one of us.”

Benjamin also lamented the many Mille Lacs Band elders who were lost in 2021. “Some were drum-keepers, knowledge-keepers, story-tellers, first-language speakers, or artists. Some served as officials in Band government. And some were all of those things. These losses have been hard to take.”

Noting that historical moments come along like this once in a generation, Benjamin issued a call for the next generation of community leaders to emerge. “Life always comes down to moments. We must recognize what is possible and seize the day. The question comes down to us. Do we have the wisdom and the will to rise to this historic moment? To make positive change, we need more community leaders who dream of a brighter future and inspire others to want that future, too.”

Historically delivered to a ballroom filled with Band members and dignitaries, this was the second consecutive year the State of the Band was delivered via an online webinar to protect the community from COVID-19.

Highlights from the Speech Include:

American Indians, by far, have the highest COVID-19 mortality rate of any population in the United States, and the majority of loss has been among elders. “According to the Center for Disease Control, and almost every vaccine expert in the world, there is no evidence that vaccines cause harm. There is plenty of evidence, however, that vaccines can save lives.” In her speech, the Chief Executive announced that a vaccine mandate will go into effect beginning February 1.

The Band published five new books that are written in Ojibwe in 2021. This is the first time in modern history that this has been done. Also, the Band will be releasing the first level of Ojibwe language lessons on the Rosetta Stone language learning platform this month. The lessons are free to Mille Lacs Band members and descendants. “Chi miigwech to all the Band elders who worked on these projects, along with our younger language-learners. These Band Members have been called ‘Language Warriors’ and have gifted us with their knowledge through story-telling and speaking. And this is a gift that many future generations will be grateful for.”

In her speech, Benjamin said one of the most eye-catching changes in 2021 was when the state erected road signs marking the federal boundary of the Mille Lacs Indian Reservation. “After fighting for state recognition of our boundary for so many decades, I will never forget the moment I saw these signs for the first time. My heart soared. These signs are largely symbolic but had a deep emotional impact on many of us – especially our elders who have fought this battle most of their lives.”

COVID-19 forced the Band to cut back its workforce at the beginning of the pandemic. Today, almost all Band-owned businesses are at an all-time high for Band Member employment, and 23 percent of Band Member associates are in leadership positions, including CEO’s, General Managers, Vice Presidents, Directors, Managers and Supervisors.

Relationships with Most Local Governments Continues to Strengthen

The Mille Lacs Band meets monthly with Pine County and works closely together on many issues, and the Band has good relationships with Aitkin and Crow Wing counties. Recently, the Band also began working with Sherburne County when they invited Mille Lacs Band DNR Commissioner Kelly Applegate to accompany them to Washington D.C. to jointly advocate for funding to protect county public lands. “For one day, the Mille Lacs Band and Sherburne County walked the halls of Congress together supporting the same goal. This was history-making, and hopefully the start of more projects with county governments.”

“Collaborations like this are the kind of relationships we want with surrounding counties, and which might be possible someday with Mille Lacs County, if only their leadership would ever decide to stop fighting every single thing that we do. Miigwech (thank you) to Pine, Aitkin, Sherburne, Crow Wing, Ramsey and Hennepin counties for respecting tribal sovereignty and working for the benefit of all our citizens. Also, miigwech to the cities of Brainerd, Garrison, Onamia, Hinckley, McGregor and Aitkin. We value our government relationships with each of you.”

In 2021, the Band started a 9th to 12th grade Alternative Learning Program at Nay Ah Shing Schools. Oshki Maajitaadaa (“Let’s start new together”) is a year-round program during and after school to meet the needs of students. “This was a major project started by former Commissioner of Education Joycelyn Shingobe, and she would be so proud of it being launched. Also, congratulations to the 68 adult Band Members who finished their degrees, from the GED’s to PHD’s, and received awards from the Band. And we are very proud of our 84 Band Members who are receiving college scholarships from the Band to support their tuition, fees and books.”