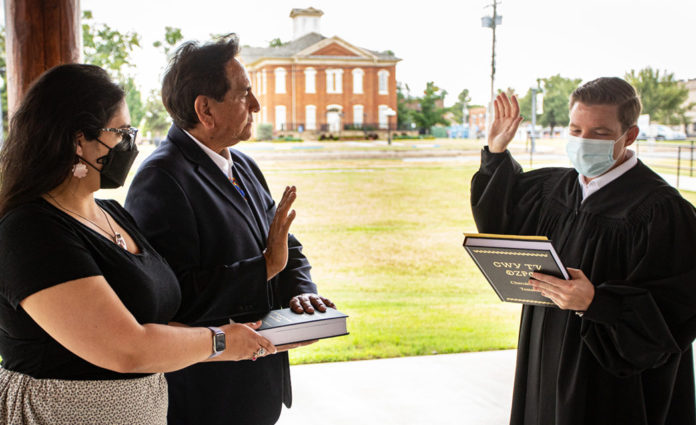 TAHLEQUAH, OK – Cherokee Nation Principal Chief Chuck Hoskin Jr. named former Council Speaker Joe Byrd as the tribe’s first Special Envoy for International Affairs and Language Preservation at a ceremony in Tahlequah on Sunday. Byrd, of Tahlequah, is a fluent Cherokee speaker and longtime public official with Cherokee Nation, serving in office as Principal Chief from 1995-99 and as a member of the tribe’s legislative branch from 1987 to 1995 and from 2012 until completing his term of office on August 14. Byrd served as Speaker of the Council beginning in 2013.

“Chief Byrd has committed decades of his career in service to the Cherokee people,” Chief Hoskin said. “We are at a point in history in which we increasingly need to engage with other tribes and internationally on a number of issues, including indigenous language preservation. From inter-tribal organizations to the United Nations, it is critical that Cherokee Nation provide leadership and remain fully engaged. We are indeed fortunate that Chief Byrd wants to continue serving the Cherokee people.”

Chief Hoskin signed an executive order establishing the new post at Sunday’s ceremony at the Cherokee Nation Peace Pavilion in Tahlequah. This year, the Cherokee Nation celebrates the 200-year anniversary of the Cherokee Syllabary and an increased focus on language preservation. The order signed by Chief Hoskin cites the need for Cherokee Nation leadership with the National Congress of American Indians (NCAI) and the United Nations Educational, Scientific and Cultural Organization’s (UNESCO) Decade of Indigenous Languages (2022-2032) initiative, among other world and inter-tribal organizations and programs.

“Cherokee Nation must continue to be a leader among tribes, whether at NCAI, the United Nations or anywhere policies and programs impacting Indian nations are shaped,” said Byrd. “This is particularly true of efforts to save endangered indigenous languages and cultural lifeways. The opportunity to provide leadership in these areas, not only in international bodies, but also closer to home in our Cherokee communities, is an opportunity I am excited to seize.”