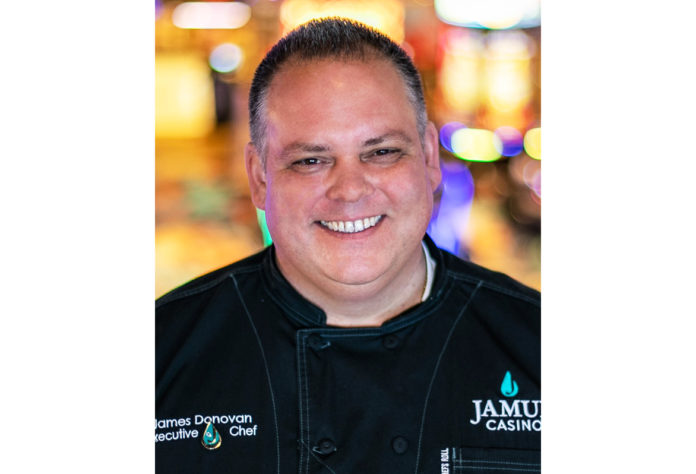 A native of San Diego, Donovan’s career began three years after graduating high school in 1996 as a line cook at Viejas Casino & Resort. Energized by the casino kitchen environment, he spent time working his way up the casino culinary ladder. Upon assuming leadership roles, he discovered a passion for relationship-building and opening and assisting in designing new restaurants.

Donovan was recruited to join Jamul Casino in 2016 as a Sous Chef. Recently promoted to Executive Chef, he is a top manager for Jamul Casino’s Food & Beverage team of 200 members, overseeing the 85 crew members in the back of the house. Helping to ensure Jamul Casino as a preferred employer, Donovan has also been focused on providing healthy and popular cuisine served in the employee dining room. He also has built relationships with regular guests, many of whom visit from throughout San Diego County.

“James brings a remarkable enthusiasm, creativity, and leadership to our culinary team. We are thrilled to recognize his talent with this well-deserved promotion,” said Mary Cheeks, President and General Manager of Jamul Casino.

“The culinary experience at Jamul Casino is the result of a very talented team,” said Donovan. “Prime Cut’s Chef De Cuisine, Cheryl Cruz, has become well-known for her Chef’s Table experience; Manager & Level II Certified Sommelier, Dennis Reiter, has built an unparalleled wine program; and Benjamin Petell, our VP of Non-Gaming Operations, is a great leader and has cast an incredible vision for our team. I am honored to work alongside them.”