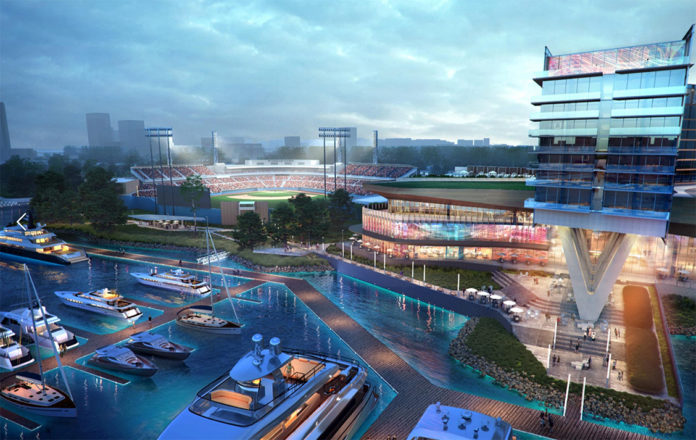 NORFOLK, VA – HeadWaters Resort & Casino has announced plans to build a temporary casino to the east of the ballpark rather than build at Harbor Park Stadium as initially considered. The Pamunkey Tribe and the City of Norfolk had explored locating the temporary facility in an underutilized area of Harbor Park because it provided a unique win-win opportunity to upgrade a city-owned, aging facility that would also benefit the community and fans at no taxpayer expense while generating immediate revenue for the city. However, issues were recently raised about the address of the proposed initial gaming facility.

With the prior construction plan, baseball fans would have enjoyed a major upgrade to the stadium restaurant that would have provided a new venue from which to watch a ballgame; the city would have received a significant capital investment in an aging facility; and the Norfolk Tides baseball team stood to benefit from renovated batting cages and Class A space taken from an interior part of the stadium that is in need of significant renovation. In terms of near-term revenue for the city and its schools, the plan to locate the initial casino in the parking lot to the east of the ballpark will result in an even better customer experience at the new Pamunkey Casino. Plans for the new gaming facility will be provided to the city in the next few weeks.

Once a site plan is submitted and approved by the city, construction on the temporary gaming facility will begin immediately. The tribe could open the temporary building as early as March of 2023, at which time tax revenue could begin to flow to the City of Norfolk for key budget priorities.

In addition, as part of their presentation to the Norfolk City Council, the tribe reported that their efforts over the past two years to support 10 local food pantries has enabled 327,181 meals to be served to the most vulnerable members of the community in Norfolk.

“This is part of the tribe’s ongoing efforts to address food insecurity and to ensure that no person in the City of Norfolk goes hungry again,” said Kevin Krigsvold, a member of the Pamunkey Indian Tribe Gaming Authority and a resident of Norfolk.

Other community participation has been the Pamunkey Tribe’s partnership with the Norfolk Tides. The tribe recently sponsored approximately 4,100 tickets for community groups such as the Booker T. Washington High School Foundation, the Southside Boys & Girls Club and the UP Center. Additionally, they provided free tickets to thousands of teachers and their families throughout the region as a sign of appreciation for the challenges they and their families have faced throughout the COVID-19 pandemic.

“When we first announced this project with the City of Norfolk, we described it as not only a major private investment in the city, but a partnership between the tribe, the city, and this community,” said Robert Gray, Chief of the Pamunkey Indian Tribe. “We will be providing a major capital investment, creating thousands of jobs, and generating millions of local tax dollars that can be used to address aging schools and other critical city priorities. But equally important, we will be in the community, working with so many organizations in Norfolk to address food insecurity and supporting other organizations in need.

HeadWaters Resort & Casino won city approval with an overwhelming majority of residents voting in favor of the project in November of 2020. Once fully operational, the project is anticipated to provide tens of millions of dollars in annual tax revenue for Norfolk that is now earmarked for city schools, thousands of jobs and nearly a billion dollars in annual economic impact for the area.