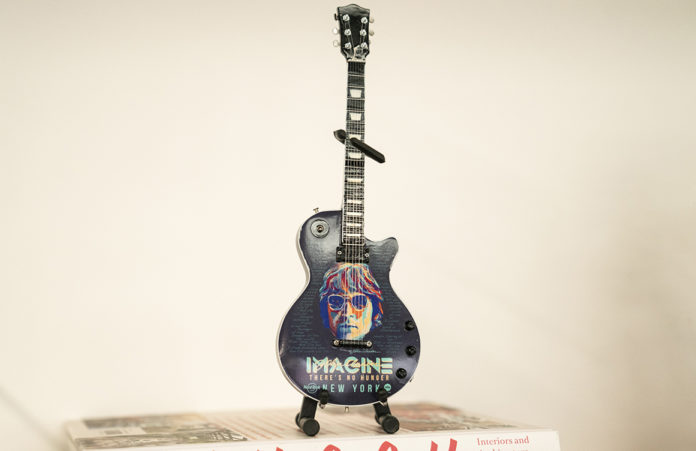 HOLLYWOOD, FL – Hard Rock International has announced its continued partnership with global non-profit WhyHunger and activist-artist Yoko Ono Lennon to launch the “Imagine There’s No Hunger” campaign, a unified effort to raise awareness and funds to combat global hunger and poverty. As a part of the campaign, and inspired by John Lennon’s iconic song “Imagine” and the 50th anniversary of its release, Hard Rock is introducing its 37th Signature Series – the John Lennon, “Imagine There’s No Hunger” Collection – for purchase online and at Hard Rock Hotels, Cafes and Casinos worldwide. The collection will feature a variety of merchandise, including two shirt designs, a hat, a mini guitar with stand and a commemorative pin.

“We’re honored to continue working alongside WhyHunger and further build upon our partnership, a relationship that has resulted in over $6.8 million raised to combat global hunger and poverty,” said Jon Lucas, Chief Operating Officer of Hard Rock International. “With music at Hard Rock’s core, this year’s campaign is especially meaningful as we look to honor John Lennon’s legacy and the 50th anniversary of ‘Imagine,’ while making great strides to raise awareness and support for WhyHunger and Hard Rock’s mutual mission to end hunger.”

To make this collection even more special, Hard Rock has partnered with WhyHunger and committed 30% of proceeds from its new merchandise sales, with a minimum contribution amount of $450,000, to support WhyHunger and its mission to end worldwide hunger and poverty. Hard Rock and WhyHunger together have helped communities in 31 countries grow nutritious food to provide 9.8 million meals to 120,600 children and their families.

“We know that hunger is a solvable problem and nutritious food is a basic human right. Exacerbated by the pandemic, food insecurity rates have skyrocketed around the globe making it even more important than ever to work together on transformative solutions,” said Noreen Springstead, Executive Director at WhyHunger. “Our partnership with Yoko Ono Lennon and Hard Rock International empowers us to further our mission of striking at hunger and its root causes, while paying homage to the vision John Lennon and Yoko Ono Lennon shared in the iconic song ‘Imagine’.”

“Fifty years ago, my late husband John Lennon released the song ‘Imagine’ with the hope of inspiring a world at peace and free from hunger,” said Yoko Ono Lennon. “Despite the challenges we face today, his impact and vision shine brighter than ever as we work to create a better, hunger-free world for families worldwide with WhyHunger and Hard Rock International.”