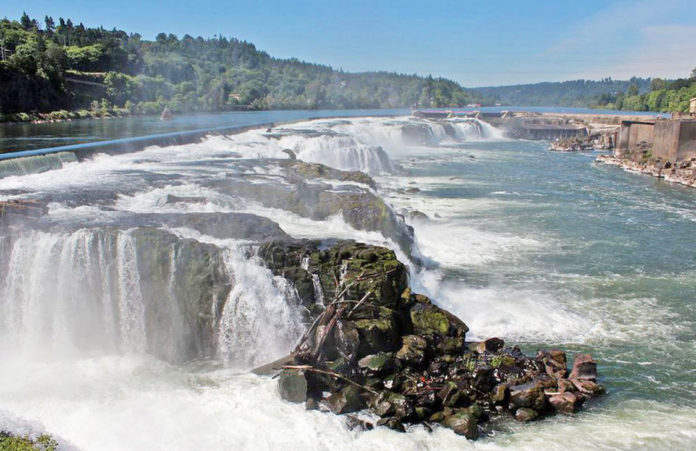 GRAND RONDE, OR – In a move that further connects the Confederated Tribes of Grand Ronde with its ancestral homelands, the tribe has chosen a new name for its 23-acre site near Willamette Falls in Oregon City. The name, Tumwata Village, includes the Native name for the Falls, tumwata, and reflects the tribe’s longstanding connection to the area.

“As a name, Tumwata Village represents the Grand Ronde Tribe’s connection to the Falls as well as the sacred lands and practices of our ancestors,” said Cheryle A. Kennedy, Chairwoman of the Grand Ronde Tribe. “As a place, Tumwata Village will be a welcoming one that provides public access to the falls, a chance to learn about our heritage and culture, and an opportunity for new prosperity throughout the region.”

Along with the name, the tribe is launching a new website, www.tumwatavillage.org, where people can learn more about the vision for the site, development plans, ongoing progress, and how they can help support the restoration efforts.

That connection grew with the Grand Ronde Tribe’s 2019 acquisition of the former Blue Heron paper mill. That purchase allowed the tribe to reclaim part of its history and return to their role as caretakers of the land and Falls.

Since the acquisition, the tribe has released a vision for the site that includes environmental and cultural restoration alongside thoughtful new development and restored public access. Focused around the central idea of healing, the vision is also guided by the values of spirit, place, people, and prosperity.

The Grand Ronde Tribe’s vision for Tumwata Village is already coming to life. After announcing its vision in early 2021, the tribe received an $800,000 environmental restoration grant from the Environmental Protection Agency. The first round of demolition at the site began in September 2021 and a second round commenced in April 2022. In the coming years, there will be further demolition, as well as environmental restoration, improved public access, and mixed-use development that will visually and physically connect to the restored landscape.

“Tumwata Village is a meaningful name for a meaningful site,” said Kennedy. “It connects the Grand Ronde Tribe of today with our ancestors, it dignifies a landscape that is sacred to us, and it offers hope for a prosperous future here at the Falls and beyond.”

The Confederated Tribes of the Grand Ronde Community of Oregon includes more than 30 tribes and bands from Western Oregon, Northern California and Southwest Washington.