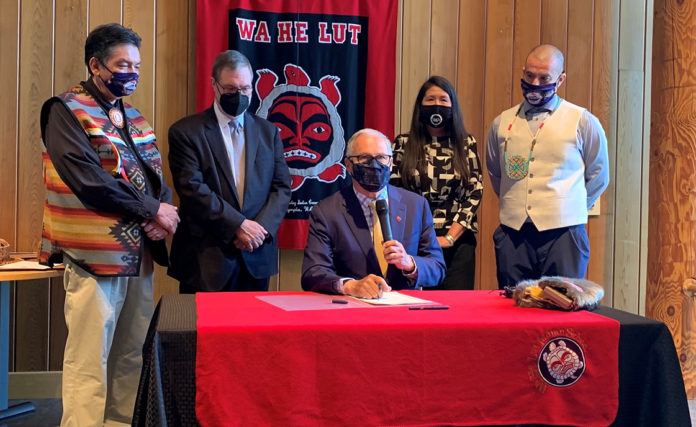 OLYMPIA, WA – Washington State Governor Jay Inslee signed HB 1372 today, which will place a statue of tribal leader Billy Frank Jr. in the National Statuary Hall. Inslee was joined by members of Frank’s family, tribal and community members, Lt. Gov. Denny Heck and Rep. Debra Lekanoff when he signed the bill in a ceremony at Wa He Lut Indian School in Olympia.

“Billy Frank Jr.’s legacy should inspire Washingtonians to have open discussions about our place in the world, both what we take from the earth and what we give back,” said Inslee. “And it reaffirms certain truths as old as the Nisqually Tribe itself: that the environment is not just a resource; it is our home, and we must protect it.”

“Billy’s voice lifted many people’s voices and brought them to the table to manage fisheries, restore habitats and protect treaty rights,” said Inslee. “When Billy spoke, people listened. His presence in the National Statuary Hall will keep more people listening for generations to come.”