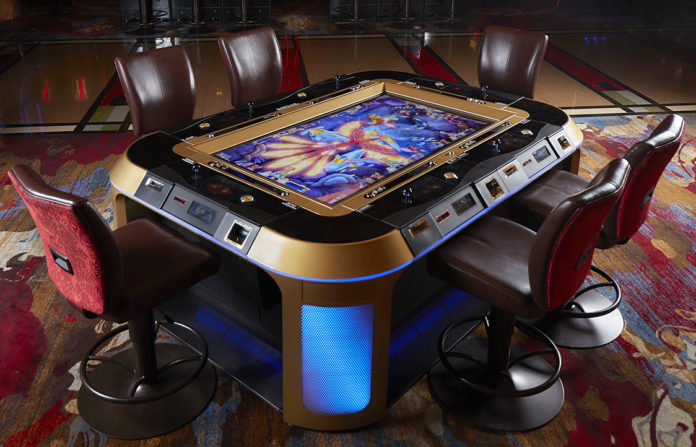 LAS VEGAS, NV – Gaming Arts has announced an exclusive partnership with Jumbo Technology, of Taiwan, to bring the game Ocean Phoenix™ to North American casino markets. While successful in Asian markets, Ocean Phoenix has not been available in the U.S. or Canada until recently with the launch of the first game at Pechanga Resort Casino last month.

“We are exhilarated to have this opportunity to launch our first multi-player fishing game, which has been popular in Asia, in one of the best casinos in North America,” said Allen Hsu, Jumbo Vice President. “It’s been a privilege to work hand in glove with Gaming Arts for this project, and we are hoping the game will provide U.S. players an exceptional gaming experience.”

Ocean Phoenix debuted at the Gaming Arts booth at G2E 2021 and was fast-tracked with the first installation in North America occurring just four months later.

The 7.5 ft long gaming console features spaces for six players. During game play, all players participate in the same game and can see the 66-inch screen in the center of the gaming area. Players work independently to capture the game’s “Four Beasts” – the Mighty Phoenix, the Ancient Crocodile, the Flawless Octopus and the Elegant Mermaid. The premise is to fire upon the invading creatures, including the Fantastic Beasts, and capture them. Each shot taken counts for game credits. When a player has captured the target, he or she receives credit awards. Players can also earn additional weaponry within the game that aids them in their quest to capture their targets.

“Ocean Phoenix is unlike any gaming machine now on casino floors,” said Jean Venneman, COO of Gaming Arts. “We are pleased to work with Jumbo to bring this exciting game to the North American markets. The arcade style cabinet will attract players and build a loyal fanbase as they encounter exciting characters and numerous opportunities to win big.”