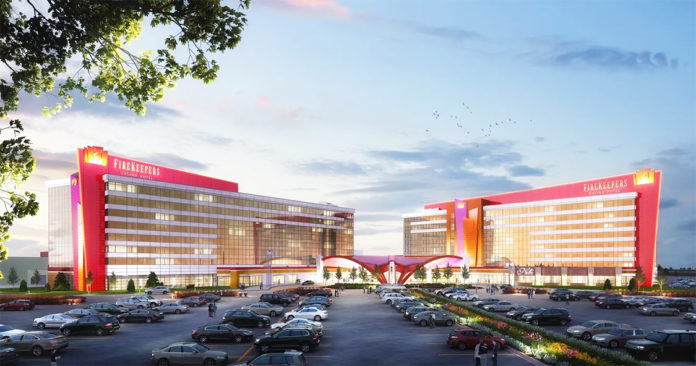 BATTLE CREEK, MI – FireKeepers Casino Hotel will be celebrating the grand opening of their 203-room hotel expansion with Nik Wallenda, world renowned daredevil of the legendary performing family, the Great Wallendas. Wallenda will walk a high wire from FireKeepers’ existing tower to the new tower, a span of more than 400 ft. – nearly 200 ft. above ground.

FireKeepers will begin the Grand Opening Ribbon Cutting at 5pm on Aug. 16, with Nik Wallenda’s walk at approximately 5:45pm. FireKeepers will also stream the event on their Facebook page and YouTube channel for fans who may be unable to attend.

“As exciting as this event will be, we don’t want anyone missing out,” said Kathy George, FireKeepers CEO. “We are thrilled to welcome Nik Wallenda to FireKeepers, and can think of no better way to signify our moving forward than with his aerial adventure across our towers.”

With 11 Guiness World Records, Wallenda has performed live in every state in the U.S. and all over the world, and garnered support from tens of millions of live viewers worldwide in network television specials on ABC, The Discovery Channel and others. From being the first person to cross the Grand Canyon, Niagara Falls, and Times Square, to walking blindfolded between two towers in Chicago, Wallenda’s latest television special on ABC was a walk over an active volcano in Nicaragua.

FireKeepers’ new eight-story hotel features a 39,000 sq. ft. first level including a vibrant new lobby bar, front desk and a second Gapi Coffee and Sweets location. FireKeepers’ signature restaurant, Nibi, one of Michigan’s finest dining experiences, is in a new location with seating for approximately 125, expanded wine storage and presentation, and a private dining area for up to 20. Also featured are new luxurious high limit gaming sections for slots and table games, and a new bar and VIP lounge for select Red Hot Rewards Club members.